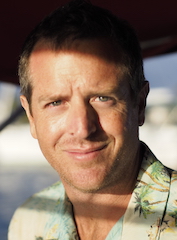 Hugh Howey spent eight years living on boats and working as a yacht captain for the rich and famous. His travels took him all over the islands of the Caribbean, up and down the East Coast, and through the Great Lakes. It wasn’t until the love of his life carried him away from these vagabond ways that he began to pursue literary adventures rather than literal ones. Whisked away to the mountains of North Carolina, he began a stint as the book editor for a popular review site and had reviews published in the New York Review of Science Fiction. Building on these experiences, Hugh wrote his first young-adult novel, MOLLY FYDE AND THE PARSONA RESCUE. The MOLLY FYDE series went on to win rave reviews and praise from readers. Hugh now lives in Jupiter, Florida, with his wife, Amber, and their dog, Bella. The dream is to return to the sea one day and complete the circumnavigation that has so far eluded him. Until then, he sticks with more literary adventures, and enjoys interacting with the readers he meets along the way.