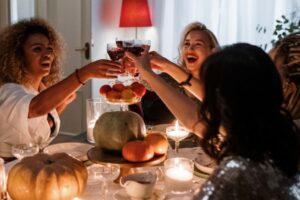 Give Your Women’s Fiction a Glow Up

We here at NLA were talking a couple weeks ago about women’s fiction. The consensus is that WF seems to be transforming. Expanding. Shedding dusty old tropes. Reinventing itself. It’s having a glow up, and more readers than ever are showing up for it. We as an agency want to show up for it too. So if you write women’s fiction and want to catch this train with us, here are some tips to get you started.

Women’s fiction is generally written by women, about women, for women; therefore, the themes and conflicts that drive the stories are deeply, personally familiar to, well, women:

In sum, WF has traditionally boiled down to one thing: Women overcoming obstacles.

It’s handy when an entire genre can be distilled into three words. But it’s also dangerous. What we’ve found after reading a few thousand WF submissions over the years is this: Too many WF plots can also be summarized “woman overcomes obstacles,” and that isn’t a concept that will support the full weight of a novel. In fact, it’s not a concept at all. (For an excellent class on what concept is and isn’t, read Great Stories Don’t Write Themselves by Larry Brooks.)

Why do so many WF manuscripts get rejected?

We just covered one possible reason: too much suffering or victimization, too many run-of-the-mill obstacles, too many tropes that haven’t been twisted, subverted, turned upside down, or otherwise made unique. Another possible reason is that you’re using tired tropes but you don’t realize they’re tired. Here are a few we’ve seen in submissions far too many times to count, plus some possible ways to start thinking outside the box:

Instead, maybe play with developing a diverse ensemble of unique humans, each three-dimensional and complex, with her own secrets, goals, stakes, etc.

Somewhere it is written that a WF protagonists must be runners. We know, we know: A lot of bestselling WF features protagonists who de-stress with a quick 5K around the park, but it’s become so overdone that it’s almost comical. Instead, what surprising, interesting, or unique ways might a female character address her concerns about her health, those extra pounds, or her stress levels?

As mentioned above, what unexpected characters can you develop for your PTA, and what surprising motivations might you give them to have joined? Further, what unexpected—rather than typical—conflicts might arise among members?

Whether you’re going for comedy or drama, what surprising “no PTA has ever had to deal with this” issues could you force on your fictional PTA? How did that predicament occur, and what even more surprising outcome will feel brand-new to readers?

Whether it’s the “I’m a complete mess on the outside” or the “I’m a complete mess on the inside,” these opening scenes are like siren songs to WF writers. Which makes sense, because they cut right to the heart of the universal, the relatable. But that means a ton of other WF writers are using these opening scenes too. So instead, in what surprising, unique way could you open your story? (Reminder: Avoid running in the opening scene.) What’s a hookier entry point or more compelling introduction to your character?

If your WF places too much focus on the familiar or too much hyperbole of the familiar—too much “it’s funny/sad because it’s true”—then your story lands more as satire than well-conceived, concept-driven fiction. Step outside that box! Explore stories, characters, settings, scenarios, and concepts that, while perhaps rooted in the familiar, also provide readers with an escape from the familiar.

How do I give my women’s fiction a glow up?

If you’re searching for that singular concept that will feel like a must-have to agents and editors, then start by upping your market awareness. What’s on the bestseller lists right now? Read the back-cover copy and zero in on the concept. Remember, “woman overcomes obstacles” is not by itself a concept, high or otherwise; it’s a genre. What are bestselling WF authors adding to that to the idea of women who overcome obstacles? How are they elevating it? Which tropes are they using and which are they perhaps inventing?

Don’t skimp on the stakes!

This one’s so important I’m giving it its own heading. Far too many WF submissions are far too light on stakes. If what’s at stake in your story is emotion based (“at the end of my story, my character will be sad or disappointed if X happens or doesn’t happen”), then your story might be in trouble. Sadness or disappointment are not compelling stakes. Again, circle back and make sure you have a strong concept, and then raise the stakes in any way you can. Do only this, and right away, your submission will stand out in the slush pile.

In WF, we at NLA are currently excited to see: