Verdict Out On Whether A Good Idea Or Not

What’s playing on the XM or iPod right now? THIS GUY’S IN LOVE WITH YOU by Herb Alpert

As I was walking the Frankfurt Fair floor, perusing the booths on display, I stumbled upon a booth for a company called Booktrack. In short, they do sound tracks for electronic books.

Not sure what I think about that, so I figured I’d give it a listen.

The sample work on the floor was the short work IN THE SOUTH by Salman Rushdie. I popped on the earphones and gave it a listen as I read. There was ambient noise and sounds that connected with the text on the page.

Kind of reminded me of Spa on XM radio.

Did I think it enhanced the reading experience? The jury is still out on that for me.

Frankfurt–Day After And Then Some

STATUS: Went to Frankfurt with a cold. Had the cold during all of the Frankfurt Book Fair. Brought the cold home with me. Truly, I like to hang on to things.

What’s playing on the XM or iPod right now? SHE’S NO LADY by Lyle Lovett

I figured blog readers would get a kick out of this. Agents Agents! As far as the eye can see… Kind of like Water Water everywhere and not a drop to drink. 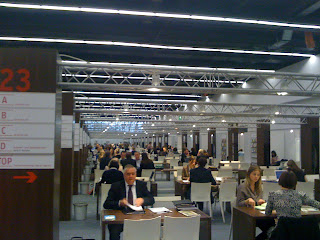 Jamie Ford, who was there at the Fair meeting with his many foreign publishers, said it looked like a sweat shop and wondered where the sewing machines were. Rather apt.

It’s definitely not romantic in any way shape or form. Agents sit down with scouts, territory co-agents, and editors to highlight frontlist titles as well as nice selling backlist titles that are available for translation sales. It’s not unusual for a rights person to have 12 to 18 appointments in a day, back-to-back, and in thirty minute intervals. Lunch is often optional.

And Frankfurt is not London, Paris, or Rome (not to offend any German blog readers!) but the downtown area is probably the least charming European city I’ve been to. I imagine outside of the city centre there are lots of nice spots but considering what was available within walking distance of the hotel, it was slim pickings.

To offset the rather bland Frankfurt, a day trip to Heidelberg was in order! From Left: Jamie Ford, Me, Luceinne Diver (also a client of mine) and Elaine Spencer of The Knight Agency. 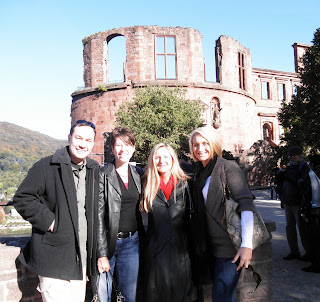 STATUS: All last week I was knocked out of commission by a nasty head cold. Winter hasn’t even begun. Like the overachiever I am, just getting it done early.

This week begins the madness that is the Frankfurt Book Fair and guess where yours truly happens to be.

For the last three years, I’ve made a point of attending each of the main book fairs: London, Bologna, and now Frankfurt. I have a foreign rights person so it’s not imperative that I go specifically so you might be wondering why I pursued this goal.

You can’t best support someone who is representing your authors until you’ve seen for yourself what the fairs are all about. It’s helps significantly to prepare the rights and press sheets so that foreign editors can best utilize them if applicable to their markets.

Also, if an editor has bought a lot of your clients, nothing beats a face-to-face meeting simply to connect on a personal level.

For this year’s fair, I have two authors with me: Gail Carriger and Jamie Ford. Both have sold tremendously abroad and have been bestsellers in several other countries besides the US.

So what does one do at Frankfurt? Lots and lots of meetings in the agents’ centre which is about the size of two football fields. And I’m not exaggerating here.

The Fair is so big, it can literally take 30 minutes to walk from an appointment at one hall to another.

To put this in perspective, it only takes me 15 minutes to walk from my hotel to the Fair.

Tonight I attended two parties–one at the German publisher S. Fischer Verlag and the other held by Hachette at the Hessischer Hof.

The Hachette party was so packed, I literally walked in and had to stifle the urge to turn around and walk back out. Elbow to elbow. I thought the chances of my finding anyone for whom I might be looking would be slim but oddly enough, it worked.

The undefinable magic of Frankfurt.

Getting Ready For Frankfurt

STATUS: I need a good neck stretch or back massage. But TGIF!

What’s playing on the iPod right now? WHAT’D I SAY by Ray Charles

I spent the day working on getting my foreign rights co-agent ready for Frankfurt (which is just a few weeks away).

So what have we been doing? Well, first we establish the list of the clients/titles that will be shopped there. Basically we just make sure that any project we hold World rights for is on the list. We also make a list of projects that the publisher holds World for. We’ll certainly field interest for those clients so we make sure we have the Publishing House’s contact person so we can share with interested parties at Frankfurt.

But the rest of getting ready is making sure that our co-agent has all current info in hand.

1. Final cover and final flap or back cover copy of any featured title.

2. Final manuscript—in page proof PDF if we have it yet but most often it’s the Word document—final sans copy edits.

3. All reviews, praise, and latest news for any client title. This is the most time consuming. Sara has been putting that together all week but there were literally events happening as of this week—like a film deal I just concluded for one of my YA authors.

I needed to make sure that info had been disseminated.

5. Made a list of foreign rights already sold for each title.

6. Made sure the marketing plans for all titles had been forwarded on as well.

There’s probably something more that I’m forgetting but that pretty much sums it up.