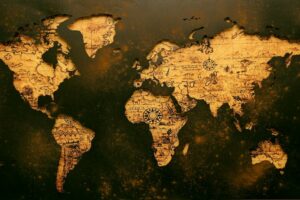 American fiction writers are all too familiar with the Hero’s Journey and the classical three-act story structure. Or the seven-point plot structure. Or Blake Snyder’s Save the Cat beat sheet. These structures share a lot of features, and they are The Law; to deviate is to accept inevitable exclusion from the hallowed halls of Literary Representation and Big New York Publishing. Yet if you’re well read in recent fiction across a variety of genres (especially by non-white or non-Western authors), then you’ve probably encountered extraordinary stories that unfold in ways that have nothing to do with heroes or journeys or three tidy acts.

Such encounters might kick off a nasty bout of cognitive dissonance. If our ubiquitous structures aren’t adhered to, then these stories shouldn’t work. So why do they? The answer is simple: Because different types of stories and different ways of telling them have, over centuries, evolved all over the globe. Learning, using, teaching, or critiquing others’ work based on only one of several similar structures is painfully limiting to both storytellers and their audiences.

Let’s look at an example of an ancient, non-Western structure.

Kishōtenketsu is a four-act plot that can be traced back through the centuries to several countries of East Asia. Though the word is Japanese, the structure itself originated in China. (We’ll circle back to China in a minute.) Author Kim Yoon Mi explains that, in Japanese, Kishōtenketsu describes the four acts as follows:

She goes on to explain that in Kishōtenketsu, “tension isn’t the heart of the story…the twist is the high point. The climb to the realization point can have many shapes as long as the twist is the high point of the story.” Further, what drives such a plot is characters’ self-actualization, self-realization, self-development, and introspection, and “because the conclusion can amp up conflict or completely deescalate it into nothing, [Kishōtenketsu] gives [writers] a lot more options and allows for open endings.”

But with Kishōtenketsu, the writer has more latitude to explore character growth as a phenomenon not catalyzed by conflict.

How did this come about? To answer, Kim Yoon Mi cites episode 6-04 of Wes Cecil’s Human Arts podcast, “Chinese: Languages and Literature” (2015). In summary, China endured centuries of brutal famine and war, and as such, conflict was never a good thing; therefore, Chinese stories decentralized conflict. So while stories that followed the Chinese qǐ chéng zhuǎn hé structure (the precursor to Kishōtenketsu) certainly included conflict, conflict often took a definitive back seat to characters’ personal development.

Here’s another difference. In our familiar Western structures, writers are expected to wrap everything up at the end, to leave no questions unanswered (unless they’re setting up a sequel, in which the expectation is still that cliffhanger questions must eventually be answered). But of Kishōtenketsu, Kim Yoon Mi says, “the conclusion isn’t always a resolute solution to everything….It’s more like a wrap up for that particular issue, while indicating the story still goes on beyond that…often with notes about the occasional backslide.”

Will Western audiences understand a Kishōtenketsu story? That’s a good question, one Kate Krake of Three Pillar Authors tackled on their blog back in 2016. Krake writes:

Western audiences are accustomed to a central conflict that is defeated. It’s central writing advice; I read it, I follow it, I advise it. For this reason, stories written with this four-act, no-conflict structure may risk not engaging with Western audiences. They may risk being dubbed a poor story, risk being criticised as not engaging, lacking development, or some other negative criticism.

I think it’s a risk worth taking.

A judgement that all plots need conflict to engage is a judgement based on inexperience. We’re indoctrinated by this Western way of thinking. It’s insular. It creates the idea that there’s only one way to write a story.

Kishōtenketsu is only one among many non-Western structures. (Please visit Kim Yoon Mi’s excellent article “Worldwide Story Structures” to explore myriad others and see examples.) I would argue that American agents, editors, publishers, and slush readers, if they are truly committed to making space at the table for diverse voices, have a duty to educate ourselves on the vast alternatives to our comfortable old “acceptable” story structures.

Photo by Aaditya Arora from Pexels