9 Things I Learned from Pikes Peak 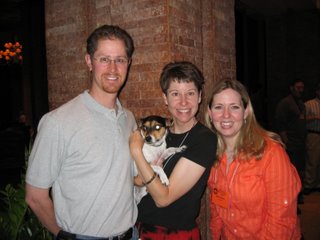 STATUS: Feeling optimistic. The new assistant started today. Had to devote a lot of the workday to helping her get started etc. but I can already tell she’s going to be a great asset. I’ll be introducing her later this week.

What song is playing on the iPod right now? MAMMA MIA by ABBA

What I learned from the Pikes Peak Writers Conference:

1. That people actually read my blog. I figured it would be a few friends, a client or two, and maybe my mother but at least 20 people came up to me to tell me that they check in every day. During an agent panel, one of the audience members asked me what was playing on my iPod right then. Funny enough, I had it in my purse and I pulled it out to tell him what song was up.

2. That people think I know who Miss Snark is. That was an interesting agent panel question. My lips are sealed folks.

3. That agents are fans too! Dan Simmons was the Saturday night keynote speaker. Don’t worry. I didn’t make a fool out of myself by being a silly fan girl or anything (however much I wanted to) but it was truly an honor to meet Dan in person, to have my books signed, and to be allowed to buy him a Diet Coke while he was at his booksigning.

4. That conference attendees are delightful, respectful, and fun. This is a big conference (700 people or so I think) and not one person acted inappropriately (at least to me anyway– perhaps some of the other agents had a hard time but I doubt it.). No stalkings. No bathroom manuscript slidings. No unexpected or undesirable pitching. Just great, savvy writers.

5. That it’s really hard to hear across the dinner table in a ballroom filled with that many people. I seriously think that all attendees assume that I shout all the time.

6. That I might have perfected the art of the on-spot critique. I highlighted things that I liked, what didn’t work, and hopefully all while being gentle but brutally honest at the same time. If I would have stopped reading, I explained why and gave great tips on how that could be revised to solve the problem. (In the past, my critiques where more rambling. Felt more constructive this time).

7. That keynotes can be truly moving and inspiring. Huge applause to Dan Simmons, Diane Mott Davidson, Johnny Boggs, and especially Wendy French who had the room in tears laughing over her Starbucks story.

8. That young people can set an example for us all. I had two pitches from youngsters under the age of 18 and let me tell you, they were both nervous but still acted professionally and gave an awesome, well-constructed pitch (in under two minutes and then asked informed questions). That’s courage folks. I’m not sure I would have been able to do the same at their age. I’d like to think I could. Don’t forget that young adults have something to say and can know what they want and how to go after it.

9. That Chutney would be a big hit. But duh, should have known that. And the picture as promised.