Not a Goddess of a cover?

STATUS: Today was a day for resolving those outstanding issues of Friday. The FedEx that was supposed to be delivered to me overnight has disappeared into the ether of lost packages. No worries. I hopped on the phone and devised a new solution with the sender. Fingers crossed that this issue will be resolved by Friday.

What song is playing on the iPod right now? GREASED LIGHTNING by John Travolta

To continue what we started last week…

As agents, we might fight for a cover change on behalf of the author and not win. It happens. And, sometimes the publisher is right.

Since Linnea brought it up, I’m going to talk about AN ACCIDENTAL GODDESS.

Here’s the cover and back cover copy. 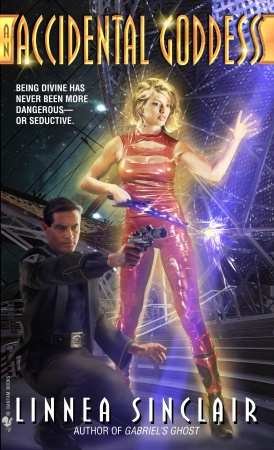 Author Linnea Sinclair returns with another sexy, out-of-this-world adventure, in which the forces of attraction collide—and combust…

Raheiran Special Forces Captain Gillaine Davré has just woken up in some unknown space way station, wondering where the last three hundred years have gone. The last thing she remembers is her ship being attacked. Now it seems that while she was time-traveling, she was ordained a Goddess…

Gillaine’s only hope of survival rests with dangerously seductive Admiral “Mack” Makarian, who suspects her of being a smuggler—or worse. But he can’t begin to imagine the full extent of it. For Gillaine is now Lady Kiasidira, holy icon to countless believers, including Mack—a man who inspires feelings in her that are far from saintly…feelings she knows are mutual. But when their flirtation is interrupted by a treacherous enemy from the past, Gillaine’s secret—and secret desires—could destroy them both….

I have to say that both of us were a little flummoxed by the ABBA Dancing Queen on the cover. The main heroine from the novel, Gilly, never wears red spandex in the story (in fact, it’s an outfit better suited for a mini-villain in the story).

But remember my rant of last week. Cover image does not necessarily accurately reflect an actual scene from the book. Not a valid argument (despite how real it feels for the author).

Bantam, Linnea’s publisher, had decided they wanted to reach out more toward the paranormal/futuristic romance market and go sexier with the cover. Linnea’s first two covers for FINDERS KEEPERS and GABRIAL’S GHOST were decidedly science fiction. Not unsexy just not sexy either. And certainly not remotely geared to romance readers—who we know make up a good portion of her fan base.

We expressed our concerns and to give Bantam their due, they did work with us on Gilly’s outfut but the change ended up being worse than the original so we scrapped it and let the cover go as is (since Bantam was adamant that the sexy outfit had to stay).

And here’s what you need to remember, I might hum ABBA every time I see the cover but Bantam was right. AN ACCIDENTAL GODDESS has outsold Linnea’s two previous books.

Something to be said about sexy red spandex.