STATUS: Doing okay. Didn’t quite accomplish as much as I had hoped. I had gotten a royalty statement today that didn’t make sense. I spent the whole afternoon cross-checking it and then calling the publishing house to see if we couldn’t straighten out what seems to be the error.

What song is playing on the iPod right now? YOU’RE THE ONLY WOMAN by David Pack

Covers are tricky. What will work? What will grab the eye in 2 seconds? What makes a cover look BIG so that the cover itself will scream BIG BOOK.

What happens when the author doesn’t like the cover?

Before I discuss this, you, as the reader, need to know and understand a few things.

1. Publishing houses know what they are doing—and yes, you can look at Longmire does Romance Covers and potentially want to dispute that fact because goodness, how do bad covers get made–but the truth is that cover design isn’t in a vacuum. The houses have tested what has worked and what hasn’t.

2. Editors want their authors to LOVE their covers. They really do. It’s your baby and they want you to be thrilled that it’s out there in the world.

3. Authors, for the most part, aren’t the best judge of covers for what will work or won’t work (seen the covers of any self-published books recently—and not to bash those folks–okay, will maybe just a little, sorry!–but cover art design is a talent and not everyone has it.

4. Covers are not meant to accurately represent events in the book. Their purpose is to grab the browser’s eye. Period. Creative license will be taken.

Got that in mind? Okay, but sometimes a cover just misses (despite good intentions and a real understanding of the market from the publishing house). When that is the case, and as an agent, I really strongly believe that is the case, then it’s time to “fight” (translation: exert gentle, reasonable pressure) for a cover change.

Here’s a couple of other things you need to know.

1. Most authors (unless you are Nora Roberts) only have cover consultation and not cover approval. You get a say but not the ultimate say. Publisher has that right so it’s really important that if you argue for a cover change, it’s in terms that make sense to the Publisher—and that the reason for the change is not because the author just didn’t like it. That argument won’t wash (see above reason number 3—most authors are truly clueless on what would work).

2. Pub Houses want the book to succeed and a cover that will allow it to do so.

And that’s how an argument is couched.

Time for an example. Here is the original cover for Jennifer O’Connell’s DRESS REHEARSAL and then the final cover that is on bookshelves today.

I’ll even include the back cover blurb so you can have it.

With the irrepressible, hilarious voice that makes her readers stand up and cheer, Jennifer O’Connell presents a delicious novel about a wedding cake boutique owner who’s about to learn that in love and life, there’s no such thing as a dress rehearsal…

No one knows wedding cakes better than the owner of Lauren’s Luscious Licks, Boston’s hottest cake boutique. Lauren Gallagher is a pro when it comes to helping brides and grooms pick out the perfect Big Day dessert. But what her clients don’t know is that her talent doesn’t end there. Because while the happy couple is choosing between buttercream and royal icing, Lauren is predicting which relationships will last, and which marriages will crumble, simply by watching them pick a cake. Her latest prediction, however, is anything but sweet. Unless her marital Magic Eight Ball is off, one of her best friends is about to tie the knot with Mr. Absolutely All Wrong.

Lauren’s got to save her friend, and prove her cake theory is true, even if it means taking her predictive powers public. But while she’s trying to prevent a potential mismatch, she’s got her own problems—involving an ex-boyfriend, his new fiancée, and the cake of Lauren’s dreams… 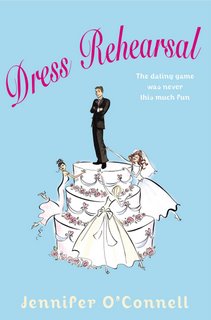 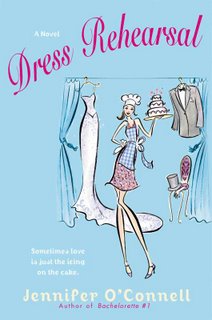 I’d be interested in hearing your initial thoughts about the covers. Tomorrow I’ll talk about why we asked for a cover change etc.