STATUS: Today I was perky. How can I not be perky (isn’t that such a fun word?) when I get the news that Target has bought in for ONCE UPON STILETTOS. They are a hard market to capture so this is great news.

In fact, here’s a picture of STILETTOS on the Breakout End cap in West Hollywood. Go Shanna. And yes, I would love to fly to Hollywood and pop that baby up to the top shelf position. 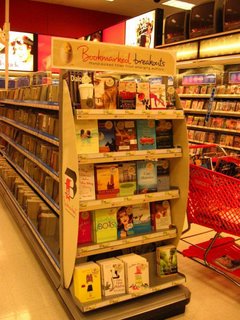 What song is playing on the iPod right now? TUPELO HONEY by Van Morrison

I have to say that I couldn’t really conjure up a whole lot of excitement to write about royalty structures and percentages. I mean, there are a million (okay, I’m exaggerating but it feels like a million) different royalty clauses in any given contract.

And it varies greatly if we are talking about the big publishers versus the small independents.

Big, Big, very Big, and did I say Big, difference.

Calculating royalties based on Net isn’t bad or evil. It’s usually just because it’s easier accounting for the smaller house.

However, you have to figure out the equivalent of what a net royalty would be versus a royalty based on cover price.

This means, as the author, you would receive on your royalty statement (after you have earned out your advance of course), 10% of $24.99 which would be $2.49 for each book sold.

When a publisher operates on net proceeds received, then you, the author, would only get a royalty on what the publisher received after the discount.

That would mean you would only be receiving $1.50 per book.

See the difference? Rather eye-opening.

So what you have to negotiate for is a royalty percentage that would be the equivalent of 10% of cover price.

They are getting a bargain.

Need I say that most small publishers are quite reluctant to give that high a percentage?