The Power Of Nice!

STATUS: Getting some new projects ready to go out on submission. There’s always so much excitement when the process is starting.

What’s playing on the iPod right now? BELIEVE by Cher

I’ve blogged about this before so y’all know that one of my pet peeves is writers having the assumption that if an agent is nice, they can’t be a tiger in negotiations. That only mean and nastily aggressive agents get the good deals.

Well, I was watching the Today show while doing the elliptical runner this morning and darn if there weren’t two powerful women being interviewed about a book they wrote about me.

Okay, so it really isn’t about me but I almost cheered in the workout room because their book is entitled THE POWER OF NICE: HOW TO CONQUER THE BUSINESS WORLD WITH KINDNESS. Something I’ve been doing for years and now there’s a book that validates my modus operandi. 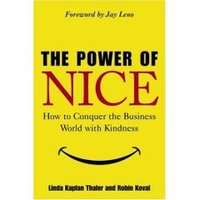 Sure, the bitch bosses get the spotlight (think Meryl Streep as Miranda Priestly in DEVIL WEARS PRADA) but it’s the nice gal who will eventually win the day and the long-term success according to Thaler and Koval.

Donald Trump weighs in with this nugget, “For my money, I would always rather make a deal with people I like who treat me well. If you want to discover the surprising power of nice, read this book. Memorize it. Use it. You’ll be glad you did.”

Guess what? Editors want to be treated well too. They don’t want to be browbeaten or yelled at during negotiations. They don’t want to be taken advantage of or made to feel defensive. In fact, I was chatting with an editor recently who now refuses to work with a particular agent. It doesn’t matter what project this agent has or if the book is the next huge bestseller; it’s not worth dealing with a moody, changeable, aggressive, nasty agent to have the author. She flatly refuses to do so.

So yes, I believe in the power of nice. And I believe that approach makes me a very powerful, successful, and well-liked agent.