Do You Deal Lunch?

STATUS: Crunch time! I have three client manuscripts I must read by the end of this weekend and two submissions to get out before the holiday dead zone.

What’s playing on the iPod right now? HOLD ME by Fleetwood Mac
(Is it oldies week or what? And yes, I need to download some new tunes but since the new network went up, my tech person is having trouble transferring the library. 1000 songs just keep disappearing.)

Some agents don’t post deals on Deal Lunch. But I do and here’s why.

Thousands and thousands of industry insiders read Deal Lunch every day. There is no better way to get the word out about a project, start the buzz, sell some foreign rights, or just give Hollywood a heads up then posting the news in Deal Lunch.

Mari Mancusi’s deal in Today’s Lunch is case in point.

Here’s the deal for those of you who don’t subscribe (and may I ask why you don’t? After all, you can get Deal Lunch Weekly—a summary of the week’s deals—for free. Sounds like an offer you shouldn’t refuse if you want to keep current on the market):

CHILDREN’S: YOUNG ADULT
Mari Mancusi’s YA novel THE CAMELOT CODE, in which Merlin sends a sophomore girl back in time to meet the teen once-and-future-pre-King Arthur and have him spend a week with her in the 21st century only to have him Google himself, discover his fate and refuse to return, to Sarah Shumway at Dutton, in a very nice two-book deal, by Kristin Nelson at Nelson Literary Agency

Not 30 minutes after the deal hit the web I was contacted by two production companies inquiring about the status of the film rights.

Sounds exciting, right? Sure. Film interest is always nice but you gotta remember my Hollywood mantra, they want to look at everything but rarely buy anything so I don’t get excited until they show me the money via a signed contract.

Still, generating interest can be an important first step to getting material optioned.

And yet a lot of agents don’t post their deals. Why not? Well, only they can answer that question but sometimes you don’t want to announce. Perhaps the client wants to keep it private. Sometimes you’d rather keep the sale under your hat so as to do an exclusive film or foreign rights submission. Maybe you don’t want the Scouts bribing people to get a hold of it (which is what happened with I’D TELL YOU I LOVE YOU BUT THEN I’D HAVE TO KILL YOU. Within a day of the sale, every film producer and scout had a copy of that proposal—a proposal which only I and a select handful of editors had a copy of…)

For some established agencies it’s policy not to post—sometimes to the frustration of their younger and newer agents who want to build a list and name recognition in the publishing world. It’s one of the main reasons I posted on Deal Lunch from the very beginning. I mean, “who in the heck is Kristin Nelson” was quite a valid question in 2002. And maybe it still is!

One agent friend who handles foreign rights for her agency mentioned that it actually would be easier to sell those rights if her agency would post the deals so the foreign publishers will have heard of the title before London or Frankfurt. She still does just fine without the announcements but she thinks it might facilitate more sales and if it’s a tool they could use…

Some clients ask me if I could please post it since a lot of writers read Deal Lunch too. Most clients are pretty darn tickled to see the deal out there.

And for those of you who can’t wait to get a hold of this new Mari title but have to because it’s not going to be published for over a year, never fear.

Her next book in the Boys That Bite YA vampire series hits shelves next week. 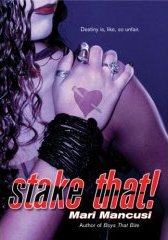