STATUS: My auction is still unfolding. Given the time of day, looks like it won’t wrap up until tomorrow.

What’s playing on the iPod right now? THE WEAKNESS IN ME by Joan Armatrading

I just had to share. Just this week, I finally got the foreign editions for my romance author Paula Reed’s latest historical romance entitled NOBODY’S SAINT.

Of course I love ALL my author covers but I have to say there’s a little special place in my heart for this very sexy US version. When looking at it, it just makes me want to pop on a little Julio I. and maybe indulge in some vigorous fanning or a nice mild swoon. 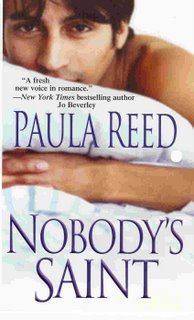 But truly, I think Paula’s publisher Kensington just nailed this cover (except Paula would say they didn’t have stripped sheets back in the late 1700s). I know. It should bother me but I don’t mind a little historical leeway as long as it isn’t blatant like zippers on blue jeans for a historical Western. Now that would drive me crazy.

So I’m pretty enthralled with the US version but then I got a load of the Dutch edition. 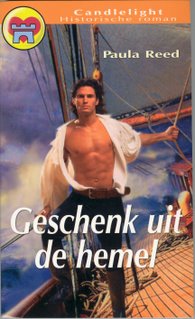 That guy surely doesn’t look like anybody’s saint. You betcha. I think this cover could work in the US without blinking an eye.
So it was doubly interesting to me to see the semi-clinch cover from her Brazilian publisher (and it’s the first of my clients to sell in South America). And I find the “Don-Juan” in the title very fascinating. 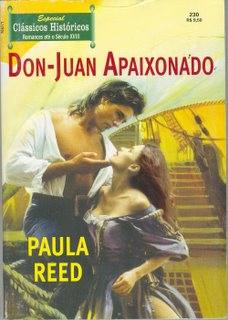 But what is clear? It’s a fun, sexy read that you should get your hands on if you haven’t already. What other romance in the world has a Spanish Gent, an Irish lass, and Mary and Mary Magdalene as interfering saints? In some respects, I still can’t believe that Kensington let us get away with this book and for that reason alone, it’s worth picking up.