What’s playing on the iPod right now? DON’T TREAT ME NO GOOD NO MORE by Sonia Dada

I have to say it’s rather rare to have two books release on the same day. I didn’t want Jana to think that I had forgotten about her so also hitting shelves as of today and yesterday is TROUBLE IN MUDBUG by Jana DeLeon.

I have to say that I love the concept for this novel and so does Hollywood. We’ve had some nice interest that we can only hope will evolve into something.

Meanwhile, if you like your mystery with a zany southern Louisiana flavor, then the first book in the Ghost-in-Law series will be right up your alley.

TROUBLE IN MUDBUG
A Ghost-in-Law Mystery Romance
by JANA DeLEON, Author of Unlucky

Maryse Robicheaux can’t help heaving a sigh of relief at the news that her not-so-beloved mother-in-law has kicked the bucket. The woman was rude, manipulative and loved lording over everyone as the richest citizen of Mudbug, Louisiana. Unfortunately, death doesn’t slow Helena Henry down one bit.

Being haunted—or more like harried—by Helena’s ghost isn’t even the worst of Maryse’s problems. Close to making a huge medical breakthrough, she’s suddenly been given an officemate, and the only thing bigger than Luc LeJuene’s ego is his sex appeal. Maryse would bet her life the hot half-Creole is hiding something. Especially because it seems someone’s out to kill her. But getting Luc to spill his secrets while avoiding Helena’s histrionics and staying alive herself will be the ultimate bayou balancing act.

“DeLeon has an excellent knack at weaving…the right amount of mystery and suspense with plenty of romance and lots of laughter.” —Once Upon a Romance 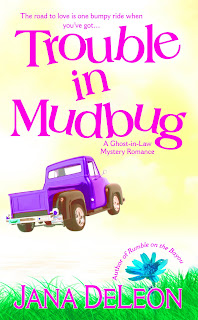