STATUS: If I can have the rest of the week be as productive as today, then I might finally be caught up. Did I jinx myself by saying that?

As much as I hate to say it, there is a lot of dreck that is published in the genre of romance.—and I’m a huge fan! But there has been many a time when I’ve started a novel just to get frustrated within the first 60 pages on the shallowness of the characterization, on the unoriginal plot structures, and just the sheer dumbness of some of them. I’ll put the novel down and not pick it up again. And I’m very suspect of that author’s next romance.

I’m not a fan to keep reading an author just because I might have really loved something they’ve done in the past. If disappointed one too many times, I’ll stop buying that writer. [A fact I wish more romance readers would do when already established writers aren’t living up to their past writing prowess]

So I have to say that it’s with delight when an established writer WOWs me with her tenth novel but that’s exactly what Eloisa James did for me in Desperate Duchess.

OMG! What a read. This writer broke every romance convention there is. The main character sees the handsome unattainable Duke in the opening chapter and decides she must have him.

But he’s not the hero that she really needs to fall for and marry.

The main character doesn’t particularly care for children. Holy cow! Can she get away with it? And she does.

Love it because I’ve never, ever ever seen that before in a novel and she pulls it off. At least for me, I still really liked the heroine (and yes, she softens her stance as the novel progresses but still!)

So I could rave on and on about Eloisa James but what I’m trying to highlight here is that I’m really picky when it comes to reading historical romance. I want it to be complex, emotionally pulling, and hot! That’s why I represent Sherry Thomas who has been called one of the best historical romance authors writing today. That’s why I represent Courtney Milan who hasn’t debuted yet but I think is in the same category.

And that’s why I’m also so proud to be representing Carolyn Jewel’s fourth historical romance that hits the shelves today—SCANDAL.

I personally think this work is a tour de force. The best thing she has ever done. And don’t just take my word for it, hear what the Smart Bitches had to say about this novel.

Now Carolyn also writes paranormal romance and in this realm, she writes very gritty, lots of language, and hot bordering on erotica. If that’s not your thing, that’s okay. You can still pick up her historical romance which is a whole different ball game. In the HR realm, in my opinion, she’s writing up there with Eloisa and Sherry and if you like those authors, SCANDAL will not disappoint! 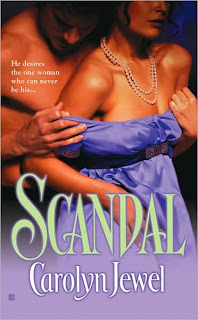