STATUS: Just had some wonderful Indian food before heading to bed. 8 o’clock is a typical dinner hour around here.

I heard there was quite a bit of chaos this morning as the fair opened but since I had a breakfast meeting off site, I missed the hoopla. By the time I hit the Fair floor around 10 a.m., everything had been sorted out.

I have to say that I did expect the mood to be rather somber but in the meetings I had, that was not the case. Editors from Germany, Finland, Japan and Brazil, all expressed optimism, were interested in many titles (although admitted that escapism was good) and had mentioned that book sales in their countries had remained steady. Some titles, such as James Hunter’s THE SERVANT, had really broken out. Something like 2 million copies in Brazil. That’s an eye popping number.

A Japanese editor mentioned that publishers there were aggressively pursuing the mobile phone reader market, which didn’t suprise me at all. Where digital is concerned, that country has a lot of early adapters.

I also had one UK editor that popped by my table simply because she was a blog reader and wanted to say hello. That was quite fun.

Here are some pics to tide you over until I can skim through my handy dandy notebad and pick out some tidbits on what is working abroad.

Here is the entrance to the LBF from the Warwick Road Entrance. 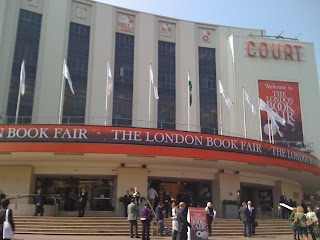 The escalator up to the International Rights Center floor. 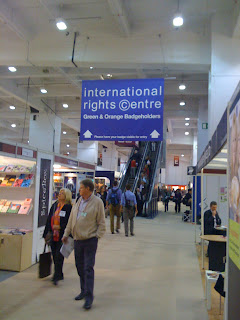 On the floor of the International Rights Center. Agents, Rights representatives, and publishers hard at work. 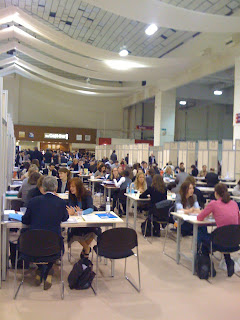 View of the fair from above. 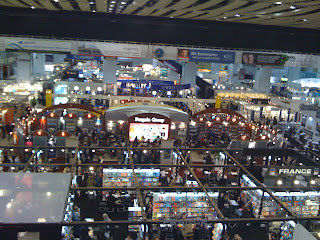 Sarah Rees Brennan in the S&S UK booth pointing to her soon-to-be released title THE DEMON’S LEXICON. She’ll be signing in the booth on Tuesday, April 21 at 1:30 p.m. (13:30) 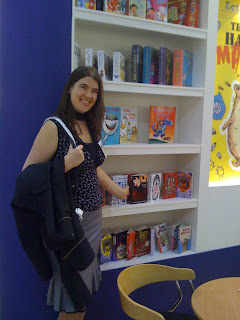