STATUS: It’s been some late nights this week and trust me, my proofreading skills are abominable when I’m blogging regularly, just imagine what it would be like if I were blogging at 1 a.m. London time.

What’s playing on the iPod right now? ENGLISHMAN IN NEW YORK by Sting

And no, this isn’t the Battle of the Titans. What I’m learning is just how different these two markets actually are. Intellectually I know this (and have always known this) but I also think we like to lump it all together and say, hey, we all speak the same language (although the Brits might argue that point) so if we share the lingo, shouldn’t we share the taste? For some books, yes, this will align and match up but for a slew of other books, we couldn’t be further apart even if the ocean was wider between us.

To get a sense of the retail environment, I decided to check out the Borders at Oxford Circus, the Waterstone’s at Piccadilly Circus and then I popped by a Books etc. at Hammersmith. I’m not saying that this is fair representation of all the stores in town; it’s just the ones I managed to visit while I was here.

I took some notes on my observations and then shared it with all the editors I’ve been meeting with this week on both the children’s and the adult side of publishing. If I covered everything in one entry, this would be one heck of a long blog so I’m going to start on the children’s side. I’ll also try and do a couple of entries over the weekend to make up for my general radio silence this past week. Starting on Monday, it’s back to full days and spotty blogging.

So what is clear to me:
1. Boy adventure books are prime time in the UK. Eoin Colfer’s AIRMAN and the young James Bond books. It’s not to say those didn’t do well in the US, they did; however, shelf space, front table displays, etc. is all about the boy adventure books here in the UK. I wouldn’t say it’s getting equal time in the US. And another interesting tidbit. Sometimes wild success in the US does not translate completely over to the same success in the UK.

For example, Robert Muchamore and the Cherub series is big, big, big in the UK. They did do a US version and it hasn’t taken off as much as they hoped. In reverse, Riordan’s Percy Jackson & The Olympians series is big, big, big in US and although it’s seems to be growing in popularity in the UK, it hasn’t been quite the phenom it has been stateside.

39 Clues. Not making a dent in the UK market.

2. Some books nail both sides of the pond with equal success. Can you guess at the two titles with matched overwhelming success? One primarily has female readers; the other mainly male readers.

Oh, I’m sure you guessed one right off the top of your head and you’d be right. TWILIGHT series is equally popular in the US and UK. Interestingly enough, so is DIARY OF A WIMPY KID.

Rather cool, wouldn’t you say?

3. Another interesting observation at the UK bookstores that I wish they’d do more of in the US. All three of the UK stores I visited, did crossover shelving in the children’s and adult areas. Here are three titles that were shelved in both sections:
a. Twilight
b. Graceling
c. Harry Potter

The Harry Potter books even had different, adult covers. There might have been more titles but those were just three that I managed to glimpse while browsing the book stalls. I love that. I don’t think I’ve seen a teen book shelved in the adult section of a US Borders, BN, or even at the Tattered Cover. I could be wrong as I just might need to pay closer attention but it looked like it was rather common practice here in England.

And last but not least for this entry, US and UK covers couldn’t be more different if you tried. For example, I was showing editors my upcoming titles that will be releasing in the UK this fall. I had both the US cover and the UK in my portfolio for people to see, pick up, look at cover copy etc.

For Helen Stringer’s SPELLBINDER, all the editors said, “ah, yes, that’s a totally US approach. That wouldn’t work over here.

And then when I showed the UK cover, all their faces lit up and they really oohed and ahhed over it. They couldn’t help themselves and had to pick it up. 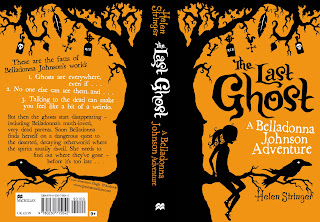 That was absolutely fascinating to me! These two covers, the titles, the approaches are radically different as you can see.

Let’s hope that both sides of the pond are right in what kids will reach for when the book hits shelves.