Knowledge Dissemination As A Tool of Promotion–Guest Blogger Sherry Thomas

What’s playing on the iPod right now? YOU’RE ON THE ONLY WOMAN by David Pack

Bad Agent. I was supposed to post this entry on Wednesday which was Sherry’s actual release day for NOT QUITE A HUSBAND. Bad Agent. 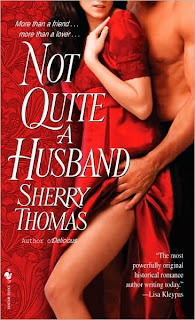 But today’s entry is so worth waiting for. Not to mention, I get to share Sherry’s hilarious book trailer. I completely share Sherry’s sense of humor so I’m going to apologize beforehand if this doesn’t tickle your funny bone. I spit coffee when I watched it for the first time. Understated to say the least…

I wanted to do that. But compared to Kristin, I had a significant drawback. I didn’t have any specific useful knowledge. What to do? Well, knowledge can be acquired. But what knowledge to acquire? I made a decision: I would learn about those things that interest me as an author and hope that what interest me would also interest a good number of other people.

For example, I was curious as to how genre books, particularly romance, get into public libraries–because I’m a devoted patron of my local public library and because if my books didn’t make it to the library branch right next to my house, I wanted to know why! I pitched it as an article idea to the editor of Romance Writers Report (RWR), Romance Writers of America’s monthly newsletter. She said go ahead, and I did.

I contacted blogger Super Librarian (http://super_librarian.blogspot.com), an online reviewer who is, in non-virtual life, the adult fiction buyer for the Orange County Public Library. I contacted the fiction selector for my local public library system. I contacted John Charles, reference librarian and fiction selector at Scottsdale Public Library who also conducts romance reader advisory workshops at state and national library association conferences. I read the material Mr. Charles kindly sent me. I did my homework.

The result? The lead article in the August 2008 issue of the RWR—and a pretty good one if I do say so myself. Plus, now I know pretty well the whole process on how books get into libraries.

My next area of significant interest is foreign rights sales. Kristin and Whitney, her foreign rights sub-agents, do a bang-on job of it. But how exactly does a sale happen? Well, I know how it happened for me in one instance. Kris Alice Hohls, the publisher of LoveLetter, a German monthly devoted to romance novels, had read an ARC of my debut novel and loved it. She spread that love to the editor at CORA Verlag, where my book was on submission, and voila, the rest was much happy dancing on the way to the bank.

So, who is Kris Alice Hohls? How did LoveLetter come about? How does a young woman decide one day to create a magazine for an underserved market? There is nothing to do but interview her.

The interview would appear in the June 2009 issue of the RWR. A couple of weeks ago, Kris Alice Hohls emailed me and asked if I would be interested in doing a panel at next year’s RWA National with her, my German editor, and Agent Kristin, to discuss how foreign rights sales really go down.

Oh, would I? You bet. Because I have been hoping to get hold of a foreign editor for a long time–along with Whitney–so I could write a proper nuts-and-bolts article on the art and science of foreign rights sales. That article would appear in the RWR when my next book comes out.

Why the RWR always, you ask? Well, because the RWR goes out to 10,000 subscribers and I get a half-page ad space in exchange for giving them an article they can use. Not to mention the rights to the articles remain with me. For example, on May 19 the article on how romances get into libraries is getting a reprinting at DearAuthor.com, one of the premier romance blogs on the net.

And when I have a book out next time, that nuts-and-bolts article on foreign rights sales just might make an appearance on this blog. Further promotion through knowledge dissemination. Maybe I’ll learn to live with promotion after all.