STATUS: Lots of meetings at the end of last week so I’ll type up some notes and get that to you tomorrow. Book Expo is starting on Friday (could it get crazier?). And just a heads up that I’m at the Backspace conference all Thursday (May 28) so if you are in town, you might think about attending. And a reminder, there’s only a couple of days remaining in the Brenda Novak auction for Diabetes. I’m doing a breakfast at RWA (or in Washington D.C. if you live in the area. You don’t necessarily have to be attending the conference just as long as you are in the City). A 24-hour read with an intense critique.

What’s playing on the iPod right now? YOU WERE MEANT FOR ME by Jewel 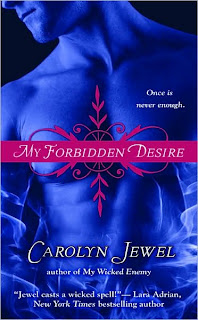 For me, Carolyn is one of those amazing writers who should be getting a lot more attention than she is. Her historical romance, SCANDAL, was a tour de force. Reviewers were stunned at how complex and sexy it was. It’s as good as anything that the established titans are doing in that genre.

And the same is true for her paranormal series that begun with MY WICKED ENEMY. The writer she is compared to the most? J.R. Ward. If you are a romance lover and haven’t picked up a Carolyn Jewel book, I only have one question for you. Why not?

So in the spirit if huge generosity (as this blog entry took some time to write!), Carolyn teaches you the art of the back story. From some of the sample pages Sara and I have read lately, this is a lesson that any aspiring writer (no matter the genre) should pay attention to. Enjoy! Happy Release Day Carolyn.

Most writers have heard repeatedly that backstory is bad. I’m here to say that backstory isn’t bad; it’s just misunderstood and misused. In fact, I’ll lay it all on the line right now and say that the more backstory you have the better. With some pretty important caveats. Yeah, there’s always a catch, isn’t there?

Please keep in mind that I am speaking in generalities here, though I will give concrete examples. Your specific story may call for a different use or construction of backstory. After you read this, don’t rush back to your story to slavishly apply these principles without more.

What you need to do, what you MUST do, is figure out how to adapt these concepts to the story you are writing. You need to make sure you understand why we, as writers, even talk about something called backstory. It’s not easy, but the time you spend thinking about it will serve you and your writing very well.

What is This Backstory of Which I Speak?

It’s all the stuff that happened before a story actually starts. It’s the baggage your characters bring with them to their story, their hang-ups, history and life stories. It’s the political and historical past that matters to the story you’re going to tell.

James Michener is one writer who built a reputation by including ALL the backstory in his actual story. Other writers, however, are not James Michener and they (we) do not have his special dispensation for backstory. Do not let Michener lull you into thinking it’s OK for you to describe the formation of the universe before you get around to introducing your characters.

Backstory can be a swift and sure route to readers who end up enjoying a book that isn’t one you wrote. But it’s also the key to making your story resonate and having people dying to find out what happens next. Powerful backstory will do that for you.

A frequent mistake I see from writers who are starting out (or sometimes, just in an early draft of a work) is too much backstory revealed. They write prologues, start their story too soon, or most egregious of all, stop the story dead to explain how the hero’s mother abandoned him as a child and therefore he believes all women will abandon him.

The problem is that we are not writing a story about the backstory of our novel. We’re writing about what happens BECAUSE of the backstory. Readers aren’t very interested in what happened to the heroine ten years ago. They want to know what’s happening to her right now. Every single time you stop telling your present story to relay the past, your story dies on the page. D. E. A. D.

Because of this, backstory is something you release into the wild in small amounts and, whenever possible, indirectly through active, present-story events. I like to think of backstory as a door I am not permitted to open except in case of dire emergency. My job is to find a way to include the backstory without opening that door.

Sweat over writing a scene in which your hero interacts with the heroine but is driven by his abandonment issues without ever explaining that he has them. Yes, I know. It’s hard. (This is me, shrugging.)

What to do In Case of Dire Emergency

Eventually, you will probably have to explain something about the past. The less time you spend doing this the better. (That’s time on the page, by the way, not time working on how to figure out where, when and how much.)

When you’ve reached the point where you have to insert some backstory or risk confusing your readers or making a character seem unpleasant or illogical, then make the revelation count. Make the reveal complicate things or add complexity to a scene or characterization. Do it and move on.

Depending on the sort of writer you are, you may or may not have all this worked out in advance. I never do. I spend a lot of time re-jiggering where and when I reveal backstory. If you’re like me and are on the write by the seat of the pants side of the spectrum, you’ll need to pay a lot of attention to where to place, add, move or remove such scenes as your story develops. If you’re more of a plotter, then these are all things you’ve struggled with before you start writing chapters. It doesn’t matter where in the process it happens, as long as it does happen.

And Now, Some Concrete Examples

In my June release, My Forbidden Desire, my heroine, Alexandrine, is a witch who doesn’t have much power. She knows she’s adopted and has searched for her biological parents, with some limited success. She has an adoptive brother she believes is dead. She also wishes she had more power and regrets that she doesn’t fit better in the normal world to which her lack of magical ability more or less relegates her. Creatures she’s only read about actually exist. There really are demons and there are mages who use their power in horrific ways. She also has an amulet she hopes will boost her power.

The hero is Xia, a fiend who hates the magekind because they kill and enslave creatures like him. He hates witches in particular because he was betrayed by a witch and ended up enslaved because of it. He also hates them because his species is attracted to the magic, and he doesn’t like being vulnerable. Unbeknownst to Alexandrine, her amulet contains the spirit of a murdered fiend, and though she thinks its supposed power doesn’t work on her, in fact, she’s bonding with the amulet in a way that may cost her her life. Xia intends to release the spirit of the trapped fiend and end its suffering.

These two paragraphs of backstory are condensed for this article, by the way. My challenge was to find a way to reveal these elements without directly visiting the past unless or until there was no other choice.

Keep in mind, however, that My Forbidden Desire is about Alexandrine and Xia and the collision of all that backstory.

How Backstory Helps you Figure Out Where to Start

My Forbidden Desire is not about Alexandrine finding the amulet or trying to use it. It’s also not about Xia having been betrayed. It’s about what those two characters do BECAUSE of the backstory I’ve laid out.

Another way to look at this is to consider at what point the backstory carries so much weight in the present that forward motion is unavoidable.

If I’d chosen to start with Alexandrine finding the amulet, the other backstory does not come into play. The identity of her biological father doesn’t matter at that point. Nor does the existence of fiends. Same with the betrayal Xia experienced. If I’d started with her finding the amulet, I would have ended up with a very different story.

Instead, I chose to start My Forbidden Desire with Alexandrine meeting the brother she thought was dead. That isn’t enough on its own to make the story move forward. Her brother is there because he’s learned mages are willing to kill her for the amulet. Since he’s leaving the country in a few hours, he’s arranged for her to have a bodyguard – the witch hating Xia who hates her even more when he learns Alexandrine’s biological father is none other than the mage who once enslaved him.

All the backstory is present in chapter one, but not all of it is explicit. From page one on, the story has no choice but to move forward. Alexandrine’s father is after the amulet and willing to kill her to get it. She is now sharing her small apartment with a creature she thought wasn’t real. Xia has to protect a witch whose father once enslaved him.

And neither of them knows just how much their world has changed.

Some Nuts and Bolts Tips

It’s been my observation that more often than not a prologue makes things worse, not better, in terms of backstory. If you have a prologue, I suggest deleting it (at least temporarily) while you confirm that it really truly needs to be there. Just because you like it isn’t enough reason to keep it around. This, of course, is true of every single scene in your story.

The use of “had” in your prose is a strong signal that you’re dumping backstory. It’s boring. Stop it. When you find yourself writing, He had gone to the store that day, never knowing his mother had been packing her bags while he had been buying Frosted Flakes.

Find another way. If that goes on for more than two or three sentences: snooze. Think up a scene or predicament or even a secondary character through which you can imply or otherwise reveal this information directly and actively. It’s hard work, I know.

I am of the firm belief that every writer must find her own way to truths about writing. My advice is to think about what I’ve said about backstory. If you disagree with me, and I’m sure some of you will, spend some time making sure you understand exactly why you disagree. It’s quite a valuable experience. After a good faith effort and study, use the parts that resonate with you and discard the rest.

I’ve always been frustrated by articles that wrap up their writing advice in pretty metaphors that show off one’s prose more than they give concrete advice. And yet, there’s gold to be mined in those metaphors. So here’s mine:.

Backstory gives your story heft, weight and shape and help you find a way into your story. But for all that, backstory isn’t your story. It’s just chasing your story down a dark alley.