STATUS: I’ve got so many great notes to share with you folks. Just not enough time in the day to blog about it all. Thank goodness we have the rest of the week.

What’s playing on the iPod right now? LYIN’ EYES by The Eagles

I have to say that I’m very glad that I attended Book Expo this year. A lot of things are changing in the industry and it only makes sense that BEA is going to evolve, transform, change, or even disappear (although doubtful) in the years to follow.

I had heard that publishers were cutting back this year and now having seen it, I can tell you for certain that that is true.

Random House had a booth the size of a postage stamp.

Macmillan wasn’t even on the floor. They simply had meeting rooms in the basement—I mean the lower floor that held the conference rooms.

At past BEAs, aisles were so stuff with people, you had to do an interesting shuffle with a lot of “pardon me” to get through. This year, the open space was like walking down an uncrowded boulevard. I think the only time I felt packed in was when the new Balzer & Bray imprint had their champagne toast launch party in the HarperCollins booth. However, once all glasses were distributed, the bar magically disappeared. It was up for maybe 15 minutes total. The champagne bottles were not abundent.

At past BEAs, ARCs (otherwise known as Advanced Reading Copies) abounded. In fact, you couldn’t walk through a booth without tripping over one. This year? Scant would be the word I would use to sum it up. Unless there was an actual signing going on, very few galleys could be had. [Although I should have assigned my client Megan Crewe to be my stealth ARC gatherer as she totally scored with a copy of CATCHING FIRE (hot sequel to The Hunger Games) and a copy of BEAUTIFUL CREATURES (which is getting some solid pre-buzz).] She managed to snag about 60 ARCs.

However, in general, I can’t complain about this year’s Book Expo. The show was very good to my authors as the pictures below will attest.

Photo 1: Hank Ryan draws crowds in the Harlequin booth for the release of her third book in the Charlie McNally series–AIR TIME. 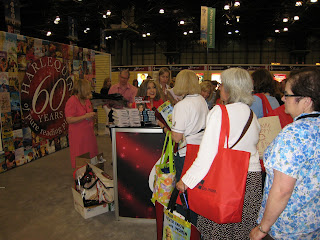 Photo 2: Now this is good editor support. Notice how Devi Pillai dressed to match the poster colors. That’s going above and beyond the call of duty! (Actually, Devi hadn’t realized that she had done so until I pointed it out to her.) 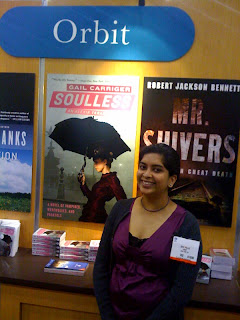 Photo 3: Gail Carriger signs her copies of her debut fantasy SOULLESS. One of the few ARCs that were out and about every day for the taking, Gail had some really nice lines–especially considering she’s so new to the scene. In fact, in a funny related story, three separate people at random times came up to me during the weekend to tell me about this really cool ARC they had snagged. Imagine my surprise that at three different times, the book they pulled out to show me was of SOULLESS. I had to then ‘fess up that it was my book. 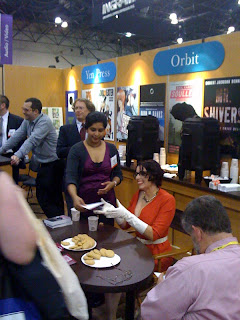 Photo 4: Nice signage for the third book in the Gallagher Girl series that is releasing next week! 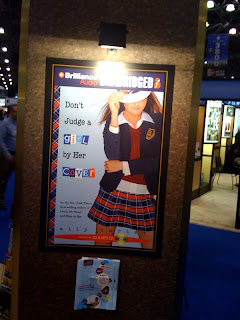 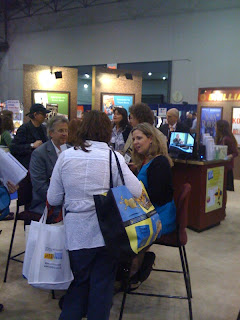 Photo 6: Electronic Poster of THE SHIFTER in HarperCollins Booth for the Balzer & Bray Champagne toast for the launch list. 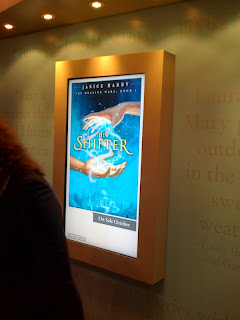