The Gallagher Girls Are Here!

STATUS: Manhattan had some rockin’ thunderstorms last night about 3 in the morning. Chutney is not a fan. Took me 20 minutes to coax her out of the closet.

What’s playing on the iPod right now? MY PREROGATIVE by Britney Spears

Interesting Fact #1: I signed Ally as a client for an adult novel—not a young adult novel. In fact, her first two published novels were adult women’s fiction for Berkley.

Interesting Fact #2: This series has over a million copies in print.

Interesting Fact #3: The first two books in this series, I’d Tell You I Love You But Then I’d Have To Kill You and Cross My Heart And Hope To Spy, both hit the New York Times Bestseller list. For this book to hit the NYT list, we’ll have to land on the series bestseller list along with the Twilight Series, Percy Jackson, Night World, House of Night, Mortal Instrument, Vampire Kisses, Nicholas Flamel, and Pendragon. 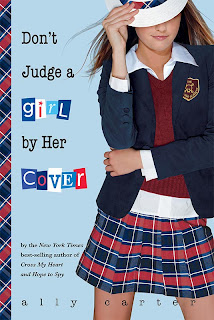 DON’T JUDGE A GIRL BY HER COVER
When Cammie “the Chameleon” Morgan visits her roommate Macey in Boston, she thinks she’s in for an exciting end to her summer break. After all, she’s there to watch Macey’s father accept a nomination for vice president of the United States. But when you go to the world’s best school (for spies), “exciting” and “deadly” are never far apart. Cammie and Macey soon find themselves trapped in a kidnapper’s dangerous plot, with only their espionage skills to save them.

As her junior year begins, Cammie can’t shake the memory of what happened in Boston, and even the Gallagher Academy for Exceptional Young Women doesn’t feel like the safe haven it once did. Shocking secrets and old flames seem to lurk around every one of the mansion’s corners as Cammie and her friends struggle to answer the questions, Who is after Macey? And how can they keep her safe?

Soon Cammie is joining Bex and Liz as Macey’s private security team on the campaign trail. The girls must use their spy training at every turn, as the stakes are raised, and Cammie gets closer and closer to the shocking truth…