STATUS: Travel day as I head back to Denver from D.C.

1. All the romance editors I talked to mentioned that they were still buying projects (and I spoke to several from each house). So nice to hear when other fiction sales have slowed down as of late.

2. Many editors expressed interest in seeing something fun and meaty in contemporary romance. It’s been a little while since contemporary was actively sought from authors beyond the established lions in the industry such as Rachel Gibson and Susan Elizabeth Phillips.

3. We all have our fingers crossed that historical romance will trend up again.

4. Paranormal is still selling well. (Here’s an interesting tidbit though. What’s hot in the U.S. doesn’t necessarily match what’s hot abroad. For example, Sherrilyn Kenyon couldn’t be hotter here in the US but not as hot in Germany. An Australian bookseller weighed in and said the Aussies like her bunches Down Under as well.) I find that fascinating.

5. On Saturday night, a non-dark romance without a vampire or werewolf in sight, Seducing Mr. Darcy, won the RITA on for best Paranormal. Does that mean anything? Heck if I know but I thought that was rather cool. Also, a Young Adult title nabbed Best First Book (the fun title Oh. My. Gods.) YA is taking over the world!

6. Three editors asked me what I thought would be hot next. Uh…if I knew that, I’d buy a lotto ticket too!

7. And last but not least, I did survive teaching three one-hour workshops back-to-back-to-back. But I didn’t have much voice or energy by the end of it. I dragged a fellow agent off to the Bantam party only to discover that it had ended 20 minutes prior to our arrival.

Oops. But that gave us ample opportunity to visit the White House where we were promptly not invited in for tea.

Me and the wonderful Sally Harding of The Cooke Agency: 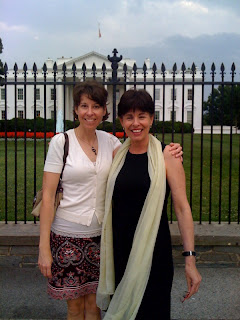