Exploding The “Must Have Connections Myth”—Guest Blogger Megan Crewe

STATUS: For a Monday, it was actually fairly quiet. Only one major issue to solve.

I thought this a pertinent and timely entry in light of a lot of recent discussions I’ve seen in the comment section of agent blogs lately.

Megan’s debut hits shelves this week—all done with nary a networked connection. 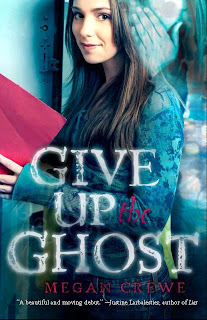 I think every aspiring writer hears this message at least once: You don’t have a hope of getting published unless you’ve got connections. I saw it pop up on message boards and websites as I was preparing GIVE UP THE GHOST for submission to agents, and couldn’t help feeling nervous. After all, I’d never talked to an editor or an agent in my life. I didn’t even live in the same country as most of them! And my close writer friends were currently unagented, so I didn’t have a referral, either.

But I’d also read posts by authors talking about getting picked out of the slush pile, and agents mentioning their excitement at finding a gem in their inboxes, and that gave me hope. So instead of digging into my savings to fly off to every conference I could manage, I simply wrote a query letter, revised it, and started sending it out.

Three and a half years later, I have an agent, a publishing deal, and a book that just hit the shelves. I met Kristin in person for the first time this past May, two and a half years after we started working together.

I know now that there’s nothing to worry about–people receive offers of representation and book deals without any prior connections all the time. I did, many of my writer friends did, and I’ve happily told this to writers who’ve said they’re afraid they won’t be able to find an agent or get published because they don’t know anyone.

Unfortunately, I realized offering my experience isn’t enough. Why should anyone believe me over those claiming that it’s impossible? Maybe my case was just the exception.

Which is why, last month, I set out to collect solid data. 270 fiction authors from a variety of genres filled out a poll asking them about their experiences selling their first published novel. With the results now in, I say with assurance that the idea that you need connections to get published is nothing more than a myth.

62% of the agented authors who responded got the agent who sold their first book through cold querying–no prior meeting, no referral.

72% of the authors sold their first book to an editor they had no connection to (either by cold querying themselves, or submitting via their agent).

You can find my full discussion of the poll results here.

Can connections help you out? Of course! But if you don’t have them, don’t sweat it. I’m a Canadian author who signed with a Denver agent who sold to a New York editor without my having any prior connection to either of them, and that novel can be found right now in stores across both countries. If I can do it (along with more than a hundred other authors who answered the poll), there’s no reason you can’t, too.