Publishers, You Want An Edge On the Competition?

STATUS: TGIF and blogging early as I actually want to leave the office before 7 pm tonight.

What’s playing on the iPod right now? OVER THE HILLS AND FAR AWAY by Led Zeppelin

Then let me throw this idea out there before all of you jump on the 25% of net band wagon so as to be like every other publisher out there offering substandard e-royalties.

Three years ago when I had a hot project (as in I’m getting pre-empts, potentially going to auction, going to have my choice of publishers), if Random House was in the mix, I’d lean their way. Why? Because RH had decent royalties for eBooks (at 25% of retail—which I know doesn’t match ePublishers but for a NYC major, not bad). Obviously other factors were in consideration such as marketing plans, other royalty structures, escalator break points but I think you can see where I’m going here.

This was 3 years ago (maybe even longer) when eBook sales might have added up to 10 copies total in any given 6-month period (SF&F or major authors excluded).

I could see the change a-coming; it was just going to be a matter of time.

So RH, you used to have a strong leg-up—which this year you’ve taken away from yourself. I can’t help but think that’s short-sighted.

You want an edge on the competition? Well then, why are all you publishers racing to do the same short-sighted thing?

Tell you what. Come to me with strong trade paperback royalty escalators, solid e-royalties percentages with escalators, decent audio percentages (downloadable or otherwise), etc. and I’m open to talking about non-outrageous advances or dare I say it? No advance at all if we can truly do a shared equal risk on a no returns basis (a la Vanguard Press and Harper Studio).

Maybe I’m alone on this (but I doubt it), I’m totally open to discussing less on the front end for a larger share of the back end.

But what I hear from publishers is the same low advance spiel with no change on the back end. And you’re wondering why I’m not leaping out of my chair with joy. I often hear that agents are to blame for demanding crazy advances etc. but have publishers asked themselves lately what’s been offered in return? Given an alternative, agents could be persuaded to think outside the box. Not given any viable alternative, then we have to stick with business as usual in order to best represent our clients.

Two to tango, certainly, as I’m thinking that “business as usual” won’t suffice for either publishers or agents as the publishing model rapidly changes…

And since it’s Friday and sheesh did I get off on a rant there, a gratuitous Chutney-in-the-snow shot from this morning. She HATES wearing her fleece. Can you tell? She won’t even look at me. Grin. 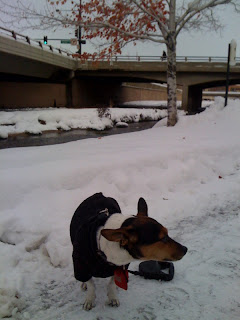