STATUS: Currently sitting on a terrace in Florence and drinking wine. 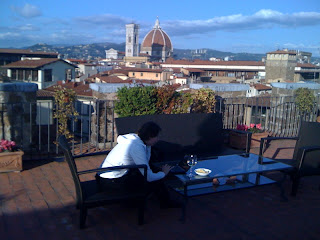 A bad internet connection at my hotel made any daily blogging difficult. I actually tried popping up to press room one afternoon as it had been rumored there was free internet there. Alas, that was not so. I’m also on vacation this coming week so I’m going to post a bunch of entries today to get you through the week.

Bologna in a Wrap Up.

1. The “big” book of the fair was a middle grade fantasy called EMERALD ATLAS. From the buzz I heard, there was a large auction in the US for the title at the same time a lot of foreign publishers decided to kick in some good money as well.

On the whole, this was seen as a positive sign that middle grade could make a little resurgence soon as sales have been slow in this arena—despite a lot of editors looking for good MG material.

2. Almost all foreign editors expressed some fatigue in vampires, werewolves, angels, demons, and all things paranormal. Despite that, these titles were still selling like crazy in their territories so I’m not sure what to tell you. I actually got a lot of interest in my fun vampire books as they are a bit different but on the whole, foreign editors weren’t jumping on things paranormal unless it was a ‘big” book.

4. Foreign editors love Ally Carter. She seems to be the one non-paranormal author who works well abroad. We just found out she is a bestseller in Brazil. How fun is that?

There it is in a nutshell really.