STATUS: Spotty blogging this week (as if you couldn’t already tell) but I will try and pop on when I can to send on any inside scoop.

Monday was crazy as I tried to wrap up anything that could be finished before leaving for Orlando. Yesterday was a travel day so spent the time on the plane getting lots of reading done! I sat next to a lady also heading to RWA who had both a Kindle and the Apple iPad with her. She let me play with that new iPad.

Oh, I like shiny things and was much enthralled. Did it make me want to run out and buy one? Yes and no. Mostly to me, it’s just an oversized iPhone without the capacity to call someone. So I liked it (of course I did) but I think I’m going to wait for the next generation before contemplating a buy. I’d like it to be smaller (something easier to fit in a purse) and to be honest, I still want an unbacklit screen for big chunks of my reading. It’s just easier on the eyes for long stints that we agents end up doing. Nice if iPad could create toggle switch so we could have it both ways. The iPad itself is nice eye candy though.

And I would judge that my seat row companion was in her fifties (if I had to make a guess). So interesting.

Since I just got to Orlando late last night (and just had dinner with one of my clients), I haven’t got any good juicy gossip from RWA to start the blogging week.

Instead, you get lame picture of the Swan & Dolphin hotel on the Disney compound. 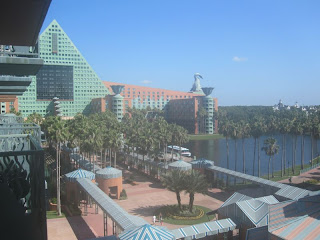 As added bonus, Ally Carter had a great turn-out in Boulder. 75 people. The next day she went to St. Louis where 170 fans showed up for her reading. Wow. Go St. Louis. 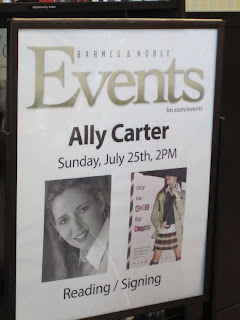 So here is Ally with a NLA Colorado local author Kim Reid who came out to show support. How fun is that? 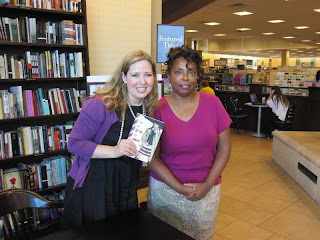