STATUS: Actually, I’m feeling half dead after almost a full week of all-day meetings from 8 in the morning to sometimes 11 o’clock at night.

I’m back at the hotel early enough to blog. Every other night I’ve returned so late, I didn’t have the energy to fire up the old netbook and sneak in an entry. I do have LOTS to blog about so get ready for NYC recap next week when I’m back in the office.

Tomorrow I’m at Random House all morning and then I head to the Javits center for New York Comic con all afternoon. Orbit has galvanized the steampunk contingent here in the city (and I can’t believe I just wrote a sentence that has “steampunk contingent” in it…) to attend the con dressed up in their steampunk finery. They’ll be giving away Parasol Protectorate buttons and any fan that is dressed up and wearing the button will have their pic taken by Orbit to use in the Soulless cover art collage with the fan’s pic included. 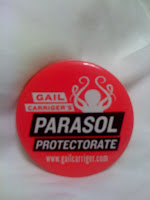 The Orbit party was held at The Cellar Bar at the Bryant Hotel on 40th street across from the park. I don’t know every attendee but there were a smattering of agents and editors clinking glasses.

I ran into my old buddy and agent extraordinaire—Janet Reid (Fineprint). She was there with the amazing Jeff Somers. Got to reconnect with a young but totally up and coming agent Suzy Townsend (also of Fineprint and hadn’t seen her since St. Louis!) Eddie Schneider (JABberwocky) was there as was Cameron McClure (Donald Maass Agency) (who I tried to talk into saying something really profound for my blog but alas, we were profoundless… I’m thinking the wine floweth. Saw Matt Bialer briefly (Sanford J. Greenberger)

My fab Orbit editor, Devi Pillai, was there looking totally wonderful in a sleek black dress. Tim Holman, so British, always startles me slightly with the European double cheek kiss greeting but by end of evening we were all into the swing of things. I did refrain from saying “Darling” at odd moments and felt rather proud of that.

Sharing in the fun were Anne Sowards from Ace and Liz Gorinsky from TOR. Bumped into Ron Hogan (formerly of Galley Cat and Houghton Mifflin).

The Orbit Anniversary party was like a mini reunion.

I have to say that earlier in the week on Monday, Tim, Devi, and I got together down at Pravda in Soho for a drink and I was really pleased to hear that they are actually quite open to adult science fiction right now. There wasn’t even a hint of pessimism to that statement. Considering I had just submitted an SF there, I was pleased. Other editors I talked to in adult publishing really only highlighted military SF or alternate history SF as what was working them. It was so nice to hear some optimism!