The Power Of Story

When I was in St. Louis two weeks ago visiting family, my mom asked me if I wanted to go and catch a matinee movie. If you know my mom, you’ll know that she loves shoot ‘em up action films, mysteries, and thrillers. The more blood and guts, the better.

In general, not my cup of tea. But the point was to hang with Mom so I said, sure, and let her pick the film. For a matinee price, I can live with just about anything.

So off we went but she had gotten the movie start time wrong so as we sat down, the movie had already begun by a few minutes.

About 10 minutes later, I had a rather puzzled expression on my face and Mom asked what was up. The theater was almost empty so I leaned over and whispered, “I recognize this. This movie is based off of a short story.”

She shrugged as she didn’t know.

But I was right. It WAS based off of a short story—and one I hadn’t read in probably over 20 years.

The movie was The Adjustment Bureau starring Matt Damon and Emily Blunt–based on the short story by Philip K. Dick.

And that, folks, is the power of story. That after 20+ years, I still recognized it even though I hadn’t thought about it in years.

That’s what you want to achieve with your own writing. And speaking of Philip K. Dick, my author Sara Creasy has been nominated for the Philip K Dick Award for her debut SF novel SONG OF SCARABAEUS. 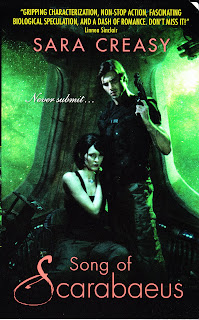 Why not check out the list and if you haven’t picked up one of these titles to read, why not? Editors are reluctant to acquire new SF authors because the sales numbers can’t compare to fantasy, so selling a debut SF writer is a tough biz (but I’m happy to report I just sold another debut SF author 3 months ago and gasp, a guy to boot!).

So if you love SF, do your part. Pick up one of these nominees.