Your Moment Of Chutney

What’s Playing on the XM or iPod right now? ROSANNA by Toto

Yesterday, Brian headed home to Denver with Chutney in tow. The poor man has had nothing but bad luck with air travel and yesterday was no exception. Brian and Chutney’s plane was delayed by almost 5 hours.

Security lines were also a mess. Over an hour to get back into the gate area if Brian exited the terminal. In short, the two of them were stuck between a rock and a hard place.

And here’s where Southwest Airlines gets my vote for best airline ever.

Although you can’t quite make out Chutney (as she’s behind that gray ladder), here is the shot Brian took of the cluster of southwest employees trying to get Chutney to go to the bathroom out on the tarmac before boarding the plane. 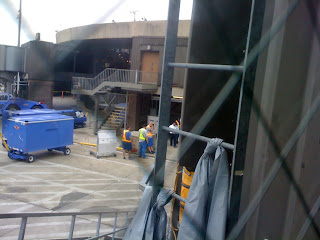 Needless to say, Chutney was too freaked out but kudos to the employees of Southwest for going the distance. They really tried!