Because It Carries More Weight When George R.R. Martin Says It

STATUS: I was at work for a full day yesterday. Today I’m working from home. Guess I pushed that envelope too far.

What’s playing on the XM or iPod right now? SUPERSTAR by The Carpenters

Agents are fans too! On Sunday, some friends and I headed down to the Tattered Cover in Lodo to get our copies of A DANCE WITH DRAGONS signed by the grand master himself.

Given the huge crowd of fans, no one was allowed to pose and take a picture with Mr. Martin. (Smart move on his part!) My friend happened to snap an incredibly dorky shot of me after he signed my book and I was walking away. Shows how comfortable with myself I am to share this lovely photo with the world. 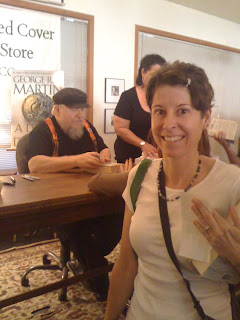 But before the signing, Mr. Martin shared a tidbit of wisdom that all writers could benefit from. He mentioned that aspiring writers would often come up to him and declare that they were working on a 7-book series–just like him.

To paraphrase Martin, he said that being a beginner, unpublished writer declaring that he is writing a 7-book series is kind of like being a guy who has just started rock climbing and announcing to the world that the first climb he’s going to do is a little hill called Mount Everest.

That’s absolutely not what you want to do. It’s too hard. Too big in scoop. If you are a beginning rock climber, you want to start with the climbing wall at your local REI or a small hill that won’t kill you first.

Martin’s recommendation? Start with short stories where you are forced to have a beginning, middle, and end. You are also forced to nail plot and character in a short amount of space. Then graduate to something bigger–like a novella or one stand-alone novel. Master that. Then tackle the big series.