Nelson Literary Agency Has No Prob With LGBTQ

What’s playing on the XM or iPod right now? MY HEART BELONGS TO ME by Barbara Streisand

Holy cow! Can’t believe I missed this article yesterday. I’m so glad an agent friend forwarded to me. Take a moment to read it and tweet it on but in short, it’s an appeal to support literature with gay and lesbian characters and the fact that there are some appalling agents and editors out there who are making requests that the writers make a gay character straight.

Seriously? What year are we in?

I cannot tell you how delighted I was to see a link to a list of YA literature that features gay/lesbian characters and my author Sarah Rees Brennan’s THE DEMON’S LEXICON series was on it.

This author of mine is brilliant. It’s a wonderful series and her new trilogy that I just sold to Random House also has an absolute kick-a** gay/lesbian main character. The first book UNSPOKEN publishes in fall 2012.

Not to mention, I have a Monica Trasandes’ debut adult literary novel coming out in spring 2012 from Thomas Dunne Books/St. Martin’s Press. It’s called BROKEN LIKE THIS and features three main protagonists: a bisexual character, a gay/lesbian character and a straight male character (had to throw that last one in there-LOL).

A multicultural author to boot. I’ll tell you right now it was a tough sell but I loved the novel and I sold it.

So add these to your wish lists if you want to show support via your buying dollars. If I had cover art or anything yet for these two titles, I’d post it here but we are in the middle of the cover design and the buy links aren’t available online yet.

I must admit it never occurred to me to add to my agency’s submission page that we are open to accepting material with LGBTQ characters because I kind of thought it went without saying but I’m rethinking it now.

Feel free to link to this blog post that it’s a-okay with us and I have NEVER asked an author to change a character’s ethnic background or orientation.

And because we are talking about multicultural too, check out my author Kimberly Reid’s debut YA novel MY OWN WORST FRENEMY. It’s an African-American urban Nancy Drew series. I mean, just how cool is that? 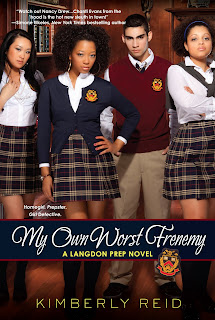 Additional Note: As there seems to be some question about the legitimacy of the original article cited and the agent/agency named, in fairness I’m also including a link to the agent/agency rebuttal to the accusation.