One Very Good Reason To Let Go That Manuscript

STATUS: I’m working super late tonight. It’s often the only good time to really check off items on the TO DO list.

What’s playing on the XM or iPod right now? ALL I WANT FOR CHRISTMAS by Whitney Duncan 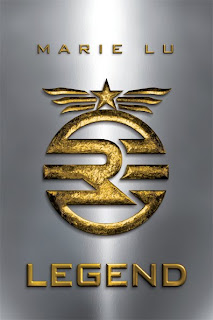 As you can guess, LEGEND released yesterday. And there is one simple fact I want all my blog readers to know. If Marie had not been willing to let go of a previous manuscript (that didn’t sell), we would not be celebrating her release this week.

All too often, I hear about writers revising and revising the same manuscript–some even for years. Sometimes, the best decision you can make is to simply let it go. It’s never a waste as you learned valuable things as a writer from the process of writing that novel.

It might stay tucked away on your computer forever. And you know what? That might be a good thing! Maybe you needed to grow in your craft and it will be your next novel where the stars will align, angels sing, and voila, publication.

Don’t believe me? You only have to ask Marie Lu.

From Marie’s face featured in Times Square after the book sold to stories in Entertainment Weekly, Wall Street Journal, and USA Today, what a ride it has been, Marie!

“Lu’s debut is a stunner. Weaving the strands of SF dystopia, police procedural, and coming-of-age—with touches of superhero and wild frontier traditions—she fashions a narrative in which the action is kinetic and the emotional development is beautifully paced. First in a series, this story is utterly satisfying in its own right and raises hopes high for the sequels to come.”
—Publishers Weekly, Starred Review

“. . . the delicious details keep pages turning to learn how it’s all going play out. Combine star-crossed lovers with the need to take down the Republic and you’ve got the makings for potent sequel.”
—Booklist, Starred Review

“Debut author Lu has managed a great feat—emulating a highly successful young adult series while staying true to her own voice. Legend will give Hunger Games fans something worthwhile to read while they await Katniss’ movie debut—and, most likely, Day and June’s.”
—VOYA, Starred Review

“Teens will love the page-turning suspense and emotional tension created by the dynamic characters. Following the success of Hunger Games, many dystopian books are filling the shelves, but this book stands out.”
—Library Media Connection, Starred Review

LEGEND, yesterday, in the promo stand as you walk into Barnes & Noble: 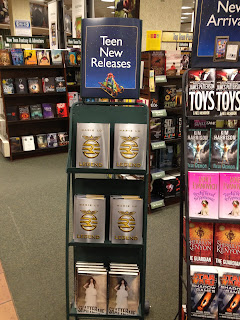 Marie on the PBS Late Night Show with Tavis Smiley: 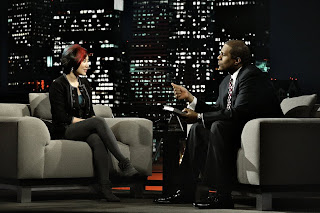 And best of all, we heard that LEGEND was being featured in elevator news reels today. Wacky but a heck of a lot of fun!

So thank you, Marie, for being undaunted and forging ahead writing that next novel in the face of rejections.

Have a wonderful, wonderful release week.