STATUS: What is up with over 100 degree days in Denver in June? We live here because summer tends to be awesome. We could be confused with Phoenix this week.
What’s playing on the XM or iPod right now? NOVEMBER by Ben Williams

A week ago I attended Denver Lighthouse Writer’s Litfest where I gave my Agent Reads The Slush Pile workshop to over 50 hearty souls–which convinces me yet again that writers are gluttons for punishment.

As I was giving the workshop, inspiration hit for a couple of blog posts I could do on writing craft that I think my blog readers would understand and find helpful.

So guess what I’m going to do this week if I can find 30 minutes of time to get one posted?

Writers are often given writing “rules” that woe be you if you break them. And for most cases, because beginning writers have not mastered craft yet, these rules hold true. But if a writer knows what he or she is doing, breaking the rule can often create something really unusual that will work and be amazing (but will have a lot of aspiring writers crying foul that so-and-so writer does it and gets away with it.)

For example, how often have you heard that as a writer, you should show and not tell? Too many times to count I imagine.

Do you want to know one NLA writer who breaks this rule all the time at the beginning of her novels? Sherry Thomas. Sherry has won the Rita Award twice in a row now (the romance genre’s highest honor) and her debut novel PRIVATE ARRANGEMENTS was named one of Publisher’s Weekly best books of the year in 2008.

So obviously somebody agrees that she has mastered craft and Sherry always begins her novels with a lot of exposition–usually a big no-no. But for her voice, it just works. Just last month, Sherry released her latest historic romance entitled BEGUILING THE BEAUTY which John Charles said in the Booklist review: “Thomas distills superbly nuanced characters and flawlessly re-created settings worthy of a Merchant and Ivory into a gracefully witty and potently passionate love story that sets a new gold standard for historical romances.”

And, if you check out the beginning of her novels, it’s all exposition. BEGUILING begins with the following:

It happened one sunlit day in the summer of 1886.
Until then, Christian de Montfort, the young Duke of Lexington, had led a charmed life.
His passion was the natural world.  As a child, he was never happier than when he could watch hatchling birds peck through their delicate eggshells, or spend hours observing the turtles and the water striders that populated the family trout stream.  He kept caterpillars in terrariums to discover the outcomes of their metamorphoses—brilliant butterflies or humble moths, both thrilling him equally.  Come summer, when he was taken to the seashore, he immersed himself in the tide pools, and understood instinctively that he was witnessing a fierce struggle for survival without losing his sense of wonder at the beauty and intricacy of life.
After he learned to ride, he disappeared regularly into the countryside surrounding his imposing home.  Algernon House, the Lexington seat, occupied a corner of the Peak District.  Upon the faces of its chert and limestone escarpments, Christian, a groom in tow, hunted for fossils of gastropods and mollusks.
He did run into opposition from time to time.  His father, for one, did not approve of his scientific interests. But Christian was born with an innate assurance that took most men decades to develop, if at all.  When the old duke thundered over his inelegant use of time, Christian coolly demanded whether he ought to practice his father’s favorite occupation at the same age, chasing maids around the manor.

This goes on for three pages. It’s backstory. Something writers are admonished to never do. But with her skill and voice, it works.

So keep that in mind. If you can pull it off, a rule is worth breaking. The trick is knowing whether you’ve truly pulled it off! From most of what I’ve seen in the slush pile, the answer is no, the writer hasn’t nailed it. 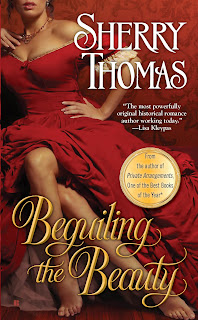