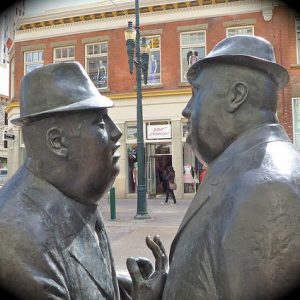 On Thursday I’m flying to New York City to give a presentation at the Writers Digest Conference on Friday morning. My topic is why a successful indie self-publishing author might want to partner with an agent.

If you are an indie author that doesn’t see the value in having an agent, I’m not really going to change your mind so there really is no purpose in reading my next several blog posts where I share my thoughts. However, if you are curious, I’m happy to share several reasons on why they do. Now of course I can only speak to why several indie authors have decided to partner with me. It’s going to vary depending on the author and the agent.  But I represent several and they find our relationship invaluable.

Thought 1: People are complaining about the archaic nature of publishing and why doesn’t it change.

Okey dokey. Let’s quit complaining and start having conversations to instigate change because how do you think change happens?

In May of 2012, I had Hugh Howey fly out to New York to sit-down with publishers. I thought it was important for them to meet him in-person just so they could see for themselves what a reasonable, personable, and forward-thinking author he was. He was not, and has never been, anti-traditional publisher. In fact, he’s fairly pro-publisher. But a partnership has to make sense and there is a lot of stuff from traditional publishing that doesn’t make sense.

Before Hugh got on the plane, we both knew that it was very unlikely that the meetings would result in an offer that we’d be willing to take.  Yet, WE DID IT ANYWAY. Why? And this might be kind of silly but both of us felt kind of strongly that having in-person conversations with publishers about our sticking points (ebook royalty rate, sales thresholds in out of print clauses, and non-compete clauses) was necessary in order to facilitate possible change in the future. In other words, we weren’t going to see the benefit of it but maybe a future indie publishing author would because we had started the conversation.

For Hugh, it resulted in a very unexpected print-rights only offer five months later (much to our surprise). That was way sooner than either of us had ever thought to hope.

I imagine that in the not-so-distant-future other indie authors (and who might be unagented) might be thanking Hugh for having partnered with an agent (way) back in 2012 so as to have these meetings. Just as they might be thanking Bella Andre and her agent for pulling off one of the first print-rights only deals (that was publicly announced -there might be others I’m unaware of).