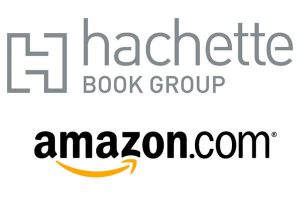 AMAZON vs HACHETTE – In the Ring!

The fight continues. Amazon proposes paying authors 100% of the royalties as the dispute continues.

Authors Guild says Amazon’s intention is to pit authors against their publisher.

Almost better than an episode of Dynasty!

In one corner, we have Stephen Colbert giving Amazon the finger (and I don’t mean proverbial) on live evening TV.

In the other corner, we have Joe Konrath ranting against Mr. Colbert and defending Amazon based on information from the 2013 DOJ settlement but not based on facts regarding this particular negotiation.

What should the average reader think or believe? My suggestion is nothing at this point. Neither Stephen Colbert or Joe Konrath know what the actual negotiation stand-off is about. This is not a polarizing moment when one side is clearly right and the other side is clearly wrong.

Both Colbert and Konrath are simply making suppositions about what they think is going on in this dispute, but they don’t actually know. And let me go on record saying very clearly that neither do I, but I can make some educated guesses and extrapolations.

So my best guesses are these:

1) Is Hachette negotiating to reinstate the agency model in their Amazon contract, but Amazon would like to remain wholesale?

3) Is Amazon willing to reinstate the agency model but looking for a higher than 30% commission for being the agency of distribution?

4) Is Amazon pushing for more money in exchange for retail services (for pre-order buttons and co-op)?

Only the parties negotiating know.

Mr. Bezos, you may be learning first hand that actual facts don’t play a part in the court of public opinion, and right now the general sentiment is not in Amazon’s favor. Over lunch, one high-ranking publishing professional told me she believes that what Amazon is proposing in this negotiation is an untenable position for any publisher to accept. I’m not sure it’s as simple as that.

Much At Stake in the Amazon-Hachette Fight