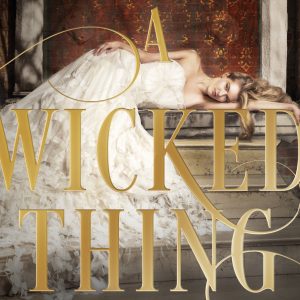 To celebrate just having spent the day in York with Rhiannon, here is her original query for A WICKED THING that landed me as her agent.

One hundred years after falling asleep, Aurora wakes up to the kiss of a handsome prince and a broken kingdom that has been dreaming of her return. All the books say that she, and the kingdom, should be living happily ever after.

But her family are long dead. Her “true love” is a stranger. And her whole life has been planned out by strangers while she slept. Aurora wants space to make her own choices, but she cannot risk losing the favor of the prince or the people and ending up penniless, homeless and, worst of all, alone. With rebellion stirring in the backstreets of the city and everyone expecting Aurora’s promised goodness to save them, she must marry the prince and play the sweet, smiling savior that everyone expects, or the kingdom will tear itself — and Aurora — apart.

When Aurora befriends a young rebel, she begins to doubt that the kingdom deserves saving. As the rebellion begins in force, and her wedding day hurtles ever closer, Aurora must decide whether she is willing to sacrifice her freedom to save this new world from burning, or whether she should be the one to light the flame.

AFTER is a young adult fantasy that will appeal to fans of Malinda Lo and Gail Carson Levine. It is complete at 70,000 words.

I graduated from Princeton University with a degree in English Literature in 2011 and work as a freelance writer and academic editor. AFTER is my first novel.

I am submitting this novel for your consideration because I read that you love fantasy YA and are a fan of Malinda Lo’s Ash, which is also one of my all-time favorite books.

Thank you for your time and consideration.

What did I like about her query pitch? First off, it’s very well written. Even the pitch has a narrative voice to it. But a couple more things:

* I love the turning-on-its-head opening premise of the first sentence. She should be living happily ever after means she probably won’t be. I want to find out why.

* I’ve never seen a Sleeping Beauty retelling where the princess wakes up 100 years later. Wow. She might as well be on another planet. Everything she knows is dead and long gone. I can’t imagine what that would be like. This story is going to be intriguing on that aspect alone.

* The pitch is wonderfully written and the conflict is clear. Should she marry the prince? Is that truly her destiny or what is best for her people?

* The author comparisons used are apt for this work.

It’s a shoo-in for me to ask for sample pages.