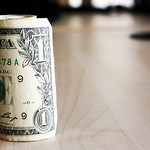 Before 2001, very little information was available about deals happening in the industry. No transparency, really, regarding what agents were selling and what editors were buying. Michael Cader and Publishers Marketplace changed all that. Now, a wealth of deal information is available to anyone via a monthly subscription and the click of a button.

The deals-search feature on the site is a powerful tool that helps agents quickly learn what editors have been buying. It also helps writers research who might be a good fit to represent or buy their novel.

At first glance, the deal-reporting system is fairly straightforward:

It’s clear cut, right? The advance falls within a particular range, which determines the announcement term used when posting the sale.

Reality is actually a bit murkier. Why? Because there is an ongoing discussion about whether bonus monies in the deal should be counted as part of the advance or not.

In several recent conversations with editors, most assumed that agents only counted the actual advance, nothing else in the deal. In conversations with several agents, most said “it depends.” Some agents just outright include the bonus monies in the advance when they report their deals. Others assess whether the deal is borderline and may count the bonus to pop the deal into the higher level. The higher the level in the report, the more foreign and film interest might be generated. So this is actually important stuff.

What about when a deal announcement doesn’t mention a level at all? What’s the subtext? There are only two reasons a money range won’t be included:

Reason 1: There was no advance (as is the case for a lot of ebook-only deals), or the advance was so small that it’s better not to mention it at all and leave it ambiguous for film and foreign interest.

Reason 2: The author is so big or well known that the deal is likely to be very high indeed. Perhaps the author’s privacy is being maintained.