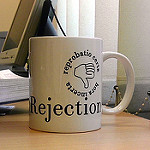 Sending A Rejection Email Is Sometimes The Worst Thing Ever

Last week, I just had to share on Facebook and Twitter an article I saw in Publishers Weekly called “Trying To Find A Literary Agent Is the Worst Thing Ever.”

I had a sneaking suspicion that it would ring true for a lot of aspiring writers. With over 7,000 people viewing the post on FB, I guess I was right!

But here is a little tidbit I bet most writers don’t know. Sometimes being a literary agent is the worst thing ever. Agents are in this biz because we love books, admire writers, and want to make dreams come true. Sending out a rejection is none of the above. I really don’t want to be in the business of crushing dreams.

Crushing dreams truly sounds like the worst job ever.

When I sell a debut author, a first-time writer finally realizing his or her dream, that is the biggest high. I’ll be giddy for weeks after because I just helped fulfill someone’s long-held dream. How awesome is that?

In 2015, I had the pleasure of selling two debut authors. Not only that, but each project sold at auction for an amount that could reasonably entice the debut author to quit his or her day job. Writing as your full time job—talk about ultimate wish fulfillment!

But trust me when I say that sometimes being a literary agent is the worst thing ever. The majority of us don’t sit in our office chuckling maniacally with glee at every rejection we send. The truth is that I hate sending rejection letters. And two of my former assistants ultimately moved on to different jobs because they, too, hated having to say no.

Some days it’s truly the worst thing ever. I see many a worthy project that I simply can’t take on. Every new client is a big-time investment because agenting—and agenting well—is a huge commitment.

I don’t expect a lot of sympathy from writers. But do know that I, for one, don’t take pleasure in hitting the send button for a rejection.