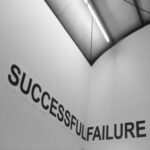 Your Protagonist Must Fail

Try-Fail Cycles
Try-fail cycles are a great way to test the weight-bearing capability of a story’s structure. Often, a weak story—one likely to collapse under the scrutiny of discerning readers—lacks try-fail cycles. These are exactly what they sound like: a character faced with a problem formulates a plan, then carries out that plan (try), but they are outmatched, or an unforeseen obstacle pops up, and the attempt is unsuccessful (fail). They fall back, lick their wounds, consider the added threat of the new obstacle and the new stakes that have been raised, and formulate a new plan…thus launching the next try-fail cycle.

Try-Yes-But Cycles
Not all try-fail cycles end in complete failure. The alternative is the try-yes-but cycle. Here, the protagonist carries out their plan, and some or all of their attempt is a success (yes); however (but), that success comes at a high cost, with some unforeseen and devastating consequence. This is the two steps forward, one step back effect, and while your protagonist might not have failed per se, the outcome still feels like a failure to readers because the stakes have been raised, the tables turned, and the jeopardy heightened.

Suspicion-Confirmation Cycles
The enemy of try-fail and try-yes-but cycles is the suspicion-confirmation cycle, which is inherently passive and uninteresting. This happens when a protagonist has a suspicion that rather quickly, usually within a few pages and through very little action, gets confirmed. For example, the suspicion “I think Jack is the one who betrayed me” is confirmed in the next scene when the protagonist passively overhears Jack colluding with the bad guys.

This is not to say that your characters should never have suspicions or work to confirm them. On the contrary! But it is not uncommon for newer writers to construct entire manuscripts on suspicion-confirmation cycles in lieu of the other types of cycles. Having a suspicion is not the same thing as attacking a problem head-on or being forced to actively react to an opponent’s unexpected maneuverings. Know the difference. In your own manuscript:

• Be aware of how many scenes are largely dialogue or internal rumination about what your protagonist suspects, or that culminate with the articulation of a new suspicion.

• Be aware of how many of those suspicions turn out to be correct. Newer writers let their characters be correct most of the time, if not every time.

• Be aware of how hard you make your protagonist work to confirm a suspicion. Make it challenging. Make it active. Make it fraught with jeopardy. Make it come at a cost.

• Be aware of how many suspicion-confirmation cycles you’ve used in relation to how many of the other more active and interesting failure-based cycles you’ve used. In commercial fiction, you’ll be miles ahead of the field if you build your story’s structure on the latter, using the former sparingly.