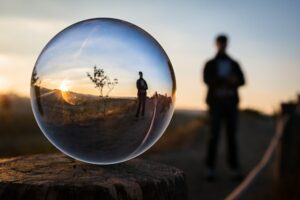 As I continued to read, I realized there was a problem. While both characters were developed well on the page, I couldn’t nail down why they were experiencing such conflict with each other. More to the point, the conflict playing out between them was inconsistent, seemingly about Thing A in these chapters, but then morphing into Thing B in those chapters, and later on, it was all about Things C, D, or E with Things A and B abandoned and unresolved.

Eventually, as a result, the plot fell apart, and the inter-character conflict devolved into nothing more substantial than snarky dialogue…all the way up until one tried kill the other for no apparent reason other than the author couldn’t figure out how to wrap up the manuscript. (Nothing like a tacked-on climax to reveal that a story needs revision!)

This was a case of an author who started out with a solid sense of how to create good characters and scene-based conflicts, but who hadn’t yet figured out that scenes are the building blocks of a central story line. With no central story line, conflict exists merely for conflict’s sake—and it often comes off as contrived or melodramatic.

As you outline, draft, or revise, remember that conflict drives your plot, or central story line. Therefore, to improve your story’s cohesion, focus on developing a single conflict-driven through-line. How? The following are four easy ways to set two characters at compelling odds with each other:

Take a look at your work-in-progress and articulate why your main hero and main villain are at odds with each other. If you have an ensemble cast, then nail down the various types of conflict that exist between various pairs or groups of characters. In all likelihood, there will be all sorts of conflict going on throughout the manuscript, but what I’m asking you to do here is distill the primary nature of your story’s conflict down to a central story question in the form “Will A happen or will B happen?”

Now make sure that whatever distilled, central-story question you came up with here is the question that gets answered at the end of the manuscript. You might be surprised to learn how many manuscripts we read in which the author loses sight of their original story question. (It’s a lot!) Preventing that misstep can be as easy as re-orienting yourself around your story’s conflict.

Photo by Pixabay from Pexels