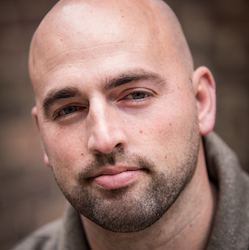 How much do you know about the plot of a series before beginning the first novel?

Saving Fable was one of the few books I didn’t write with a series in mind. I honestly just wanted to have fun again when I first started writing it. I’d been reading really intense, brooding stories. I was writing something similar. So for Saving Fable, I dove in without thinking about the big picture. I just wanted to have a blast in each and every scene. I really only had the first book in mind, even if the story and world do lend themselves to a series!

When writing a series like Talespinners, what is your process for creating a new antagonist/conflict in each book? How do you determine if the conflict will suit your main character?

For the first book, I just had to figure out who could cause Indira the most trouble in her first year of school. There were a few natural answers to that. In book two, I really wanted to imagine someone powerful that Indira could not take on by herself. The whole point of book two is teamwork, so she needs her friends if she wants to defeat the antagonist. In book three, well, she goes to the literal birthplace of all antagonists at Antagonist Academy in Fester. She’s kind of surrounded there!

In her adventures, Indira encounters many famous characters like Alice from Wonderland at Protagonist Preparatory. What is your method for writing characters from familiar stories? How much research do you do before adding a classic character to your story?

For me, I really want to honor those characters, but also put my own slight twist on them. I think that’s what people are really looking for most of the time. Something that honors the spirit of that beloved character, but that also sheds a new light on them.

What inspired you to write the Talespinners series?

The very first inspiration was that I saw a girl run and leap into a puddle with wild abandon. I imagined her vanishing, and tried to imagine where she went next. That scene never made it into the books, but it’s certainly where the entire thing began.

How do you approach writing a novel for a middle-grade audience?

My approach is to have a bit more fun, and throw in a bit more whimsy. I also kind of assume that a lot of my audience will read up. So I’m not really writing for eighth graders with this series so much as I’m writing for fifth graders. Readers, often, want to reach up into the next category. I wrote Saving Fable with that in mind.

You are an author of science fiction and fantasy, both middle grade and young adult. How do you adjust your writing process to the switch in genre and audience?

It’s mostly tone and character POV. Ultimately, though, I hope the DNA of all my stories is the same. I want to write something wildly entertaining. I want to write with the understanding that my audience could, and might, set the book down at any time if I’m not drawing their interest. So the goal is just to write a great story, no matter the audience.