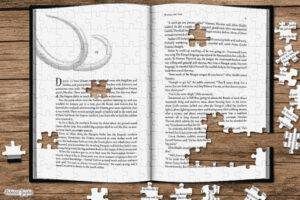 Piecing It All Together

This month, we asked two NLA authors about outlining.

Do you outline before writing a new novel? If so, how closely does the finished novel resemble your original outline? If not, what is your process for piecing it all together?

“This is a process that has evolved over time with me. Early on, I never outlined, preferring the freedom of following where the story took me. I quickly learned that my brain doesn’t naturally follow a story arc this way though, and my drafts were jumbled, very long, and in need of some painful cuts. For a while after that realization, I began outlining in detail, but that inhibited a lot of freedom for my characters to express themselves. Now, I do a skeletal outline: I make note of the bones of the novel—the turning points, the climax, crucial character changes in each act, etc.—and then allow the story to play out in the space between.

“My stories almost always closely follow my outlines to the three-quarter mark. Then, inevitably, one of my characters has to reveal something HUGELY IMPORTANT to me, and after some groaning and a lot of chocolate, I have to backtrack and layer it all in.”

—Kristen Simmons, author of the Vale Hall series and Set Fire to the Gods

“No, I wish I could! I have tried, but whenever I have outlined, even if I’m already at the halfway point trying to figure out how to get to the end, the finished novel never bears any real resemblance to what I’ve planned.

“I’d like to call my process organic, but really it’s perilous—let’s not even talk about time-consuming. I do my novels in several exploratory drafts, basically writing each draft until I realize that I’m doing something fundamentally wrong—or that so many things need to be changed that I might as well go back to the beginning to incorporate everything I’ve learned so far about the story.

“For example, at the moment I’m writing a mystery set on a steamship. I’m 30,000 words in and I’ve just now had to stop and make a choice about what my main characters were doing when the murder took place. That is, what is their actual purpose for being on the steamship in the first place?

“Not that I didn’t have a rough idea earlier—more than one rough ideas, in fact. An outliner would have figured out the specifics sooner, probably. But for someone like me, I simply don’t know what should happen until I’m at the point where I absolutely can’t write another word unless I first make a number of story decisions, from the very broad to the very detailed.

“I’m no good at knowing what should happen ahead of time, but usually my gut has a pretty good sense afterwards if I’ve arrived at the correct story decision. I get the feeling of something clicking into place, of inevitability, of, ‘Ah, so this is what it should have been all along.’

“Now if only I can achieve that in outline form one of those days!”

—Sherry Thomas, author of the Lady Sherlock series and The Magnolia Sword