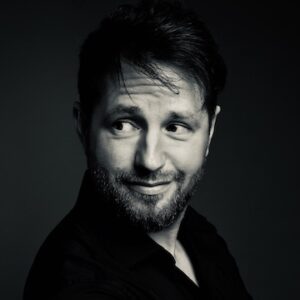 Interview with Luke Smitherd, Author of The Stone Man

Your latest novel, The Stone Giant, is book three of your Stone Man series. How do you get readers caught up on what happened in books one and two? How do you gauge when to introduce new antagonists and when to return to past ones?

I wanted the fates of the surviving characters from The Stone Man to form part of the mystery of The Empty Men for the reader…but I also knew I wanted to bring the survivors back for The Stone Giant once the new stakes were well established and answers were required (that, and I’m a sucker for a team-up). The backstory, or in this case the five-year gap between books one and two, is a huge part of the plot of The Stone Giant, and I had a lot of fun dropping the various reveals into the story. Books two through four were heavily plotted out before work was started, and keeping the past-and-present continuity tight over the three or four years I was working on these books isn’t something I particularly ever want to do again!

Which of your characters have you had the hardest time leaving behind once the novel was complete? Which character was the easiest to pick back up?

Maria was probably the hardest to pick up again by far, because the events of The Empty Men change her so much; likewise with many of the other protagonists. They’re very different people now. (But Brigadier Straub was easy as pie.)

How do you get to know your characters?

I get to know my characters—as cliché as it many sounds—as I go on. Then on the second draft I lean into the elements that have come out organically through the first draft.

Describe a scene from one of your novels that was particularly difficult to write. Why was writing it so difficult?

The scenes that are difficult for me to write are always logistical issues, especially with sci-fi. I know what I want to happen, and the effect required, but how do I describe something magical or otherworldly in a grounded way? I’m a real stickler for detail in that regard so it has to be right.

When editing, what aspects of critique do you apply to your novel? What aspects do you feel require the context of the whole manuscript?

As you can probably tell by this interview, I talk too much. Editing is all about trimming for me. After that it’s all about checking that the characters appear on the page the way they do in my head, and—to answer the context element of the question—that the way they change (or don’t) through the text is consistent with the (usually awful) events and/or crazy things they’ve encountered.

The Stone Giant by Luke Smitherd was released March 29, 2022. Order your copy today!