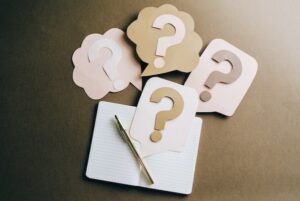 This month, let’s tackle a narrative device that lots of fiction writers use, one I’m calling “rhetorical story development.” It’s when writers have characters ask themselves rhetorical questions as a means to deliver character or scene information to the reader. Here’s how to recognize this device, understand why it tends to lack depth, decide when to use it (and when not to), and approach revision.

A rhetorical question is one that’s asked merely for effect with no answer expected. Here’s an example of how fiction writers use it as a narrative device:

James stared at Rob, fists at his sides. How could Rob accuse Anna of such terrible things? Didn’t Rob know that Anna was the love of his life? Didn’t he care that after this they could never be friends again? “Take it back,” he said through clenched teeth.

I stared at the mysterious symbols carved into the tree. The last symbol was an arrow pointing into the woods. I shivered. Should I follow the arrow? Allow myself to be swallowed up by the shadows? What choice did I have? This was the first clue I’d found in months. Was there any other way to find out what really happened to my sister? I squared my shoulders and marched toward the treeline.

­Writers who use this device are giving us a glimpse of what’s going on inside the POV character’s head in moments of confusion or indecision. Nothing wrong with that, per se. In fact, fiction writers should give us that glimpse; otherwise, if they’re only writing what can be seen and heard, they’re probably writing scripts in prose form rather than fully developed fiction. (Which is why “show don’t tell” can result in bad scene work, but that’s a topic for another day.)

However, here’s a caution. When the rhetorical-question device is used too often, a piece of fiction can begin to sound like a choose-your-own-adventure story narrated by someone outside the scene rather than in it, living it, being acted upon by it. When you look at the device more closely, you can see that it fails to give meaningful insights into how a character thinks—that is, what makes that character unique and interesting. In other words, if they’re asking themselves the same questions anyone would ask themselves in the scene’s particular situation, they risk becoming everyman or template characters.

In the immortal words of Jo Bennett to Dwight Schrute on The Office, “Stop asking yourself easy questions so you can look like a genius.”

OK, a little comic relief there. I get that characters aren’t pulling a Dwight and trying to look like geniuses—they’re often just trying to figure out what to do. But easy questions make for weak narrative. One way to do get your characters to stop asking themselves easy questions is to simply turn those questions into statements. Complete thoughts. Instead of showing us your character’s confusion or indecision, show us their belief or their resolve. Then show us how they’re applying that resolve to their decision about what to do or say next. If you do, then right away, you’ll be opening the door to more meaningful character development.

Let’s take a stab at revising our examples:

James stared at Rob, fists at his sides. No way would he let Rob get away with accusing Anna of such terrible things. Sure, he and Rob had been best friends since kindergarten, but Anna was the love of his life. No one—especially not Rob, who always got every girl he ever wanted—got to talk about Anna that way. “Take it back,” he said through clenched teeth.

Notice how James comes across as much more resolved in this revision. He skips over the questions and gets straight to the heart of what he’s really thinking in that moment. But what if James is the type of character who really is always questioning himself? Then try:

James stared at Rob, fists at his sides. He had two options. One, back down the way he always did, walk away and let Rob’s lies about Anna hang in the air between them. Or two, stand up for himself and the love of his life once and for all, thirty years of so-called friendship be damned. “Take it back,” he said through clenched teeth.

There are myriad ways to develop or stay true to a character in a moment of analysis and decision without using the rhetorical-questions device.

I stared at the mysterious symbols carved into the tree. The last symbol was an arrow pointing into the woods, where shadows hung like shrouds from gnarled branches. I shivered. Everything in me wanted to turn and run, but this was the first clue I’d found in months. Someone in those woods knew what happened to my sister. Soon, I would know too. I squared my shoulders and marched toward the trees.

In this case, questions like “Should I follow the arrow? Allow myself to be swallowed up by the shadows?” can just be cut. They waste space that otherwise can be used to paint atmosphere (“shadows hung like shrouds from gnarled branches”), clearly express internal conflict (“Everything in me wanted to turn and run”), or develop tension (“Someone in those woods knew”).

None of this is meant to say that you can never use this device or have your characters ask themselves rhetorical questions. It’s just to point out that overuse of any device is a good thing for writers to be aware of and, hopefully, add another tool to your self-editing toolbox.