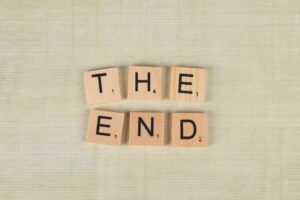 Let’s face it. In the fiction industry, there’s a heck of a lot of emphasis heaped on your opening pages. Your opening is what gets judged when you enter a contest. It’s what you submit to agents when you’re looking for representation. And, after your hardcover is published, it’s how a bookstore-browsing reader makes a $30 spending decision.

Why don’t we place equal emphasis on endings?

Well, not every reader makes it to every book’s end—which, of course, is a function of the effectiveness of the book’s beginning and middle. So here we are, back at the importance of openings again, right?

Kind of. Here’s how I think of it:

A memorable ending is like the dessert at the end of a fine meal. It’s the impression that readers carry with them into their world long after they finish reading your book. It’s proof you’re a master not just of prose and scene work, but of storytelling.

Endings are important. That said, endings are hard—like everything else about writing fiction. Here are seven tips I hope will make them easier.

How many of you have gotten 50, 60, 70,000 words down before you realize you have no idea how your story is going to end? Probably a lot. And that’s fine! But no matter your process (plotter, pantser, or hybrid), slow down at the end. Don’t rush it. Pretty much every full manuscript I’ve ever read over the years gets exponentially sloppier in the last 10-20%—proof positive that writers accelerate when they see light at the end of the tunnel. Resist that urge. Instead, put as much thought and care into your final act as you did into your opening.

Close your manuscript and open a clean, new document. Write the summaries of at least three different ways your story could end. More than three is even better. Explore and exhaust the possibilities. For each possible ending, identify the predominate emotion you hope that ending will evoke in your reader.

Retrace all your threads.

Reread your manuscript from page one. Make a list of all the story questions you planted—all the things you planned to (and promised the reader you would) reveal later in the story. Did you? Which threads remain untied? Your ending should tie up those threads.

Be judicious with cliffhangers.

Related to retracing your threads, a good cliffhanger is singular. Of all the story questions you planted and all the reveals you set up from page one, tie up all (if not all, then most) of them. Leave one, strong, compelling story question unanswered to entice readers to pick up the next book in your series. Too many untied threads come off as sloppy story craft.

Read ten recently published books in your genre or watch ten movies that would appeal to the same audience as your book’s. Stop when you reach 75% or so. Then write down the ending you anticipate is coming based on clues in the story, the characters’ arcs, etc. Don’t just think about it. Write it down. Don’t skip this part. Forcing yourself to put your thoughts into actual written words is where real learning happens. Then read/watch the ending. Which ending was better: yours or the writer’s? Why?

Think about your favorite, time-tested books and movies. Pick three and write alternate endings to each, staying true to the story and character arcs already in place. Or don’t! If your preferred ending would require changes in the beginning and middle, what would those changes be? What did your endings do that the original endings did not?

If you’re really struggling to come up with your story’s ending, put the whole thing in a drawer and walk away for a couple weeks or even months. Sometimes coming back to a story with the fresh eyes that only time can give you is just the thing.

(Photo by Ann H. on Pexels)