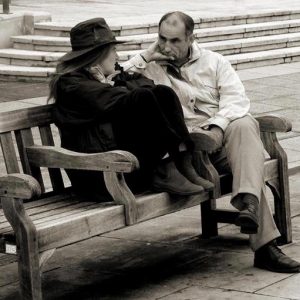 #4) Your novel opens with a lengthy passage of “talking heads” dialogue.

Here’s what fascinates me: The openings we suggest that you avoid actually evolve out of a writer’s good intentions. In this case, writers know that starting with dialogue can be a very dynamic way to open a story. Dialogue is inherently more energetic than a description-of-the-setting opening, and if done well, a dialogue-heavy opening can reveal a lot about character(s).

Just so we’re clear, we’re not suggesting that you ax every bit of dialogue in your opening. The problem arises when an opening provides only dialogue to the exclusion of all other narrative elements.

We call this the “talking heads” opening. When two (or more) characters have a conversation for a page (or more), then readers receive no other vital story clues, such as setting, context, tone, background information, or the power dynamic between the characters doing the speaking.

“Did you bring my money?”
“Relax. I brought your money.”
“Where is it? Give it to me.”
“Not yet. We’ve got some things to talk about first.”
“I already told you everything I know.”
“Not everything.”

Any interest I have in this story, or any investment I might feel in the outcome of this conversation, is eclipsed by questions. Where are we? When are we? Are these characters men? Women? Children? Aliens? Talking squirrels? What are their roles in this story and how do they relate to each other? Is one a police detective and the other an informant? Is it two mobsters, one bribing the other? Is one a bully and the other a nerd? Is one a circus clown and the other an elephant trainer? Is this a funny story set in a 1960s Florida retirement community or a disturbing psychological thriller set in present-day Baltimore?

The human brain is hardwired for story, so when you, the writer, leave details up for grabs, the reader’s brain is going to fill them in. It literally cannot stop itself. The longer you withhold basic story information, the more time the reader’s brain has to stockpile incorrect assumptions. That means that when you do reveal story details as you intended them, and readers discover they were wrong, they’re going to get confused, frustrated, and annoyed. They might even abandon your book. And that (brace yourself for some tough love) is not their fault.

Remember that a published novel comes with a title, cover art, and back-cover copy, elements often worked up by professionals. These give the writer’s opening scene context. But with sample pages, all we have for context is your query letter’s pitch paragraph…and often that’s not enough. Approach your opening scene as though you’re writing for an audience with zero context, and you’ll start to think differently about what to include and what to save for later in the story.

For now, take a look at your opening scene. If you’ve got lots of dialogue, make sure it’s balanced with other narrative elements: some details about setting, some evocative word choices that set the tone, some personal details about the characters—not only what they look like, but how they move, react, and behave. For fun, consider this revision:

Sister Mary Margaret slid onto the empty stool next to mine and tapped the bar. Old Joe uncapped a bottle of Jameson’s Irish and set up her usual double. She threw it back, then motioned for another.
Without so much as looking at me, she said, “Did you bring my money?”
“Relax,” I replied, watching Old Joe pour. “I brought your money.”
Down went her second double. “Where is it? Give it to me.”
I took a sip of the warm beer I’d been nursing for the last hour. Sister Mary Margaret was known for two things: drinking hard and being late. Scratch that. It was three things she was known for. The third was dealing harshly with anyone who crossed her. I gulped. Sam made himself clear when he sent me in here. No info, no money.
“Not yet,” I said, trying my best to sound tough. “We’ve got some things to talk about first.”
Her laugh sounded like gravel in a cement mixer. “I already told you everything I know.”
I pulled an envelope out of my coat’s inside pocket and slid it toward her. “Not everything.”

Want to try? Craft a brief opening scene from these six lines of dialogue, and then after we repost this article on Kristin’s blog (within a couple weeks), leave your scene in the comments section. Just for fun.

Remember: Please take all the advice we give you in this article series with a grain of salt. If a writer has mastered craft, he or she can make any opening work, even ones we suggest you avoid. We read hundreds of sample pages every month, and the types of openings we’re sharing with you here often don’t work because they are overused. Avoid them, and you automatically increase your chances of standing out in the slush pile. Until next time…keep writing!